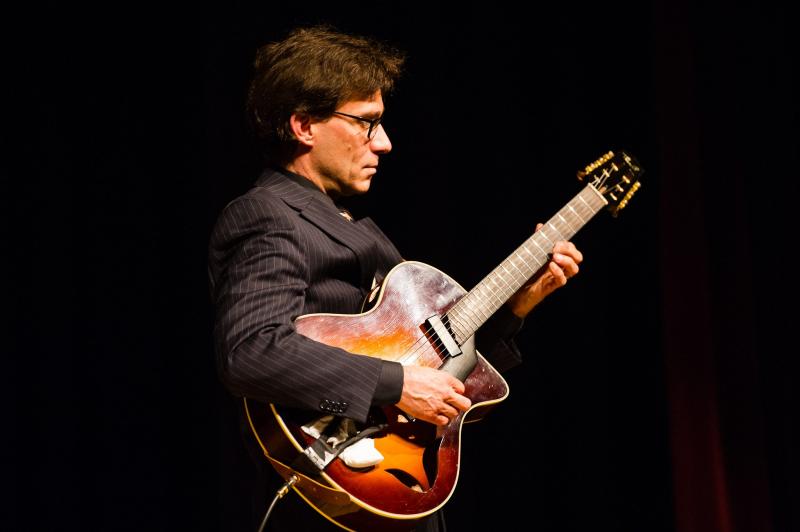 BY DR. JUDITH SCHLESINGER
September 29, 2014
Sign in to view read count
It seemed to happen overnight. One minute it was all video games, with the boys totally immersed in furious thumbwork. They'd sit together for hours on end, staring at a busy screen, manipulating cartoon adversaries to kill each other in great bursts of color and noise. There was considerable musical talent among them, and assorted lessons here and there, but no burning interest that any adult could detect.

Then suddenly the group shifted, like a flock of birds responding to a secret signal and abruptly tearing off in a whole new direction. Their new direction was guitar, and the focus became listening, collecting, finding heroes, and trying to play like them.

And in the beginning, there was... Jimi. The guys started gathering Hendrix—all the available minutiae of his life, as well as his music—and quickly knew more about him than those of us who actually lived through his career. Now, instead of diving into another round of Super Smash Brothers Melee, they assembled on weekends to practice Hendrix licks and scour the Internet for unreleased tracks.

Soon they were debating the relative merits of Hendrix and Eric Clapton as the musician father of two of them recommended some Mississippi Delta blues and taught them the power of the I-IV-V-I. IPods were shared, and began to overflow.

When a Tae Kwando buddy turned them on to flamenco star Paco de Lucia, the crew became Paco completists as well. It was a short step from there to Django Reinhardt, with the help of three inspirational DVDs. We started with Sweet and Lowdown (Sony Picture Classics, 1999), the great Woody Allen film about a guitarist who worships the famous gypsy so much that he faints at the sight of him. Its delightful soundtrack, which features Howard Alden and Bucky Pizzarelli, gave the boys their first exposure to Django's jaunty, elegant sound and the possibility of playing it forward.

We followed this with Django Legacy (Vestapol Video, 1999), the French documentary about Reinhardt's life that was filmed where it all happened.

The third DVD had the greatest impact: it was Frank Vignola's Gypsy Jazz Jam (Mel Bay, 2004), where Frank duets with gypsy virtuoso Jimmy Rosenberg, who may have the longest and fastest fingers on the planet.

But it wasn't just their blazing technique that impressed the guys: it was the sight of Frank and Jimmy producing this incredible music in an ordinary, un-celebrity hotel room, with the wonderful drummer Joe Ascione playing brushes on everyday objects, like a stack of telephone books and a manila envelope. The casual setting made this legendary style more accessible, and soon the boys had moved beyond "Little Wing" and started working up "Tico Tico."

Not long after this, we learned that Frank Vignola and his quintet were booked for a brunch gig at the New York Blue Note, one of the world's leading jazz clubs, and less than an hour away. We immediately bought six tickets, and drove the boys to Greenwich Village on a bright September Sunday.

Our first stop was Washington Square Park, the heart of the Village, which had its usual weekend circus on display: colorful skaters and strollers and groups of wannabe musicians playing for tips and dates. True to their adolescent creed, the boys were suave, acting as if they'd been there before (they hadn't), and betraying no excitement about the show ahead. They kept their cool until we'd settled into our table at the Blue Note, and Frank came by to say hello [I'd done the liners for his terrific Vignola Plays Gershwin CD (Mel Bay, 2007)].

And what a memorable moment that was. As far as we could tell none of the boys actually levitated, but their masks of careful indifference instantly slid off and shattered as they shook hands with their idol. A bit dazed at first, they soon started smiling, and pretty much grinned through the entire jubilant set, especially when the band launched into the now-familiar grooves of "Tico Tico." They were also encouraged by the performance of Aaron Weinstein, the gifted violinist, who at 22 was only five years older than they were.

After the concert we had dessert and coffee at the nearby sidewalk cafe, where we discussed the show and watched the parade along the fabled MacDougal Street. All told it was a perfect day, and the boys expressed their joy in classic teenage fashion, by gleefully punching and pushing each other in the car, all the way home.

Once they got back, they paid the ultimate tribute to Frank and Django—and Howard and Bucky, Paco and Jimmy and Jimi: as soon as the coats came off, the guitars came out.