Joe Ascione knew music would be his love from an early age. The eastern Long Island native was first drawn to the drums at the age of four, when he saw his cousin Stephen DeLauro playing on a drum set in Brooklyn. Ascione has played professional gigs since he was 12, and spent his late teens working as a roadie for Buddy Rich.

Before embarking on a professional career in music, Ascione earned a B.S. in engineering and then studied philosophy, psychology, and theology in a Catholic seminary. Since then, he has enjoyed a wide variety of musical experiences ranging from jazz club dates to Carnegie Hall appearances, from studio recordings to tours reaching as far as Armenia. He is currently celebrating the Arbors release of his new CD Post No Bills. As a leader, he has also released a CD on the Nagel-Heyer label entitled My Buddy, a tribute to Buddy Rich recorded while on tour in Germany. 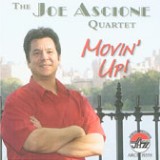 All About Jazz musician pages are maintained by musicians, publicists and trusted members like you. Interested? Tell us why you would like to improve the Joe Ascione musician page.