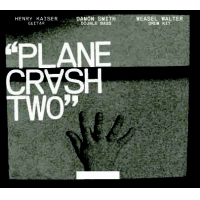 This album was created shortly after experimental guitarist Henry Kaiser's large ensemble collaboration with fabled Brit guitarist Ray Russell The Celestial Squid (Cuneiform, 2015), as Plane Crash Two marks the second installment of the trio's unadulterated free improvisation exploits. Here, three longtime associates generate that special synergy required to pull it off. Regardless of tempo or pitch, the musicians expand, contract and generate call and response patterns via microsecond-like reactions amid the ensuing developments.

The trio pulls out the proverbial stops with all out blitzes and frenzied soloing galas akin to a lethal aerial assault; although, "Fifi Blows Her Top" features the guitarist's nimble plucking and Smith's mournful bowed-lines and other contrapuntal schemas. In sum, the group's simmering narratives, animated exchanges and free-spirited risk-taking mechanisms spawn an indubitably intense joyride.