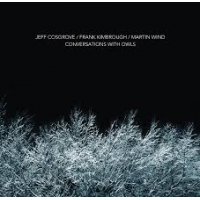 Returning to the microphones after producing the scintillating Alternating Current, drummer Jeff Cosgrove pulls together a completely different trio for the marvelous Conversations With Owls.

The mystery of improvisation is explained by Jean-Michel Pilc in his important book, It's About Music as when the music plays the musician. There is no beginning and end; there is no separation between the instrument, the others musicians or the audience. Achieving this state is what makes a musician more than just a merely proficient player.

There is no doubt that the trio of pianist Frank Kimbrough, bassist Martin Wind and Cosgrove achieved this state on this session at Klavierhaus Recital Hall in New York City. Never having played before as a trio, Cosgrove's only explicitly expressed desire for the session was to do a ballad-ish version of "My Favorite Things" in the heart breaking manner of Shirley Horn.

Now, Kimbrough and Wind are entirely different players than Matthew Shipp and William Parker and, not surprisingly, the atmosphere and vibe of the session is quite different here. Kimbrough's exquisite touch and masterful pedal technique make the piano sing, while Wind's note placement and arco technique are second to none, plus there is overall tonal feel.

Someone has to start, and Kimbrough begins what was to named later as "The Owls" with but a single, pure note, immediately answered by Wind. Once Cosgrove has entered, the piece's beautiful atmospherics are established, and the mood for the session is set. As it proceeds, it becomes clear that the session really ought to be thought of and listened to as a single entity with its own larger emotion/energy arc encompassing the arcs of the individual pieces.

There was an audience at the session, and they had no idea that "I Loves You Porgy" and "My Favorite Things" were going to be played, giving them the advantage over the CD listener holding the liner.

Neither tune is openly stated by Kimbrough at first, and "I Loves You Porgy" has both Cosgrove and Wind laying out for a full thirty seconds until it is clear what has happened.

While "My Favorite Things" was planned, how it evolved from within the session's flow is magical. The tune has a very strong melodic and harmonic contour, making it immediately recognizable. "Forest Hunters" ends with Kimbrough alone down in the piano's depths. "My Favorite Things" rises from those same depths, and while Cosgrove and Wind enter knowing what is happening, Kimbrough gives only the barest hints of the tune's signposts for a very long (musical) time. What the audience felt once they recognized the tune is anyone's guess.

Writing about music can be very frustrating, with all the above words merely hinting at what must be heard -a very special, even magical, confluence of unique talents.