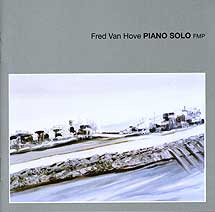 Belgian pianist Fred Van Hove has always been identified with the European free music movement, but he also stands outside the cadre of players that formed the FMP label. This rerelease (first time on CD) of two solo LPs, Prosper (1981) and Die Letzte (1986), reaffirm his personality and uniqueness as an improvising player.

Piano Solo comes as part of the limited edition box FMP im Rückblick—In Retrospect (1969-2010), with its extraordinary 218-page book full of photographs, articles, and a complete FMP discography, plus twelve discs of music. Piano Solo and each disc is also separately available.

Van Hove is probably best known as a member of Peter Brötzmann's early bands with Han Bennink, and a participant in the legendary Machine Gun (FMP, 1968) session. His distinguished solo career is a better gauge of his chosen path as an improviser. While the previous release Flux (Potlatch, 1998) and a rerelease Complete Vogel Recordings 1972-74 (Unheard Music, 2002) are outstanding, these two long out-of-print sessions from 1981 and 1986 give a more fitting insight into his art.

Van Hove applies a sharp improvisational style, quite separate and apart from the American tradition. That said, he skips and leaps across the keys, not unlike Cecil Taylor, and his rolling notes on "Chiens Chauds Stimés" are reminiscent of Don Pullen's knuckled notes. Van Hove though, extends his range here squeezing out sounds from the insides of the piano and from the wooden frame. These two dates percolate with ideas and musical schemes.

Throughout, Van Hove maintains his own language. On "Other Piece" the pianist flaunts a sort of silent movie soundtrack, drawing attention to both the action of the music and the off-kilter melody. His reinvention of sound and performance can be vocal, as on "Toesspraak," or dance-like, as on "Lest." Throughout, he sustains a creative energy while designing a new and varied sound.