By Miriam Zolin
December 15, 2005
Sign in to view read count

Music is an abstract art. It doesn't really resemble anything, and yet it evokes a great deal.

Peter Knight's 5+2 Brass Ensemble has recently released Invisible Cities and Other Works, on Rufus Records. The CD comprises compositions inspired by Italo Calvino's book Invisible Cities, which is a series of short and often surreal pieces about fictitious cities, described by Marco Polo to Kublai Khan as a series of conversations. Peter Knight is based in Melbourne, Australia. All About Jazz talked to him recently about the CD.

All About Jazz: What was it about Calvino's Invisible Cities that drew you and was important enough to prompt composition, performance and recording?

Peter Knight: I first read Invisible Cities years ago and it was one of those books that stayed with me. When I decided that I wanted to write a suite for the brass ensemble it popped into my head again. I think it seemed like a great starting point for musical inspiration partly because of its structure: it is basically a collection of short pieces that each describe an imaginary city. I wanted my suite to be a collection of vignettes each with a strikingly different 'feeling' but at the same time that link together on some level, in a similar manner to Calvino's stories. Not sure if the suite achieves that but I have had some postive feedback from Calvino fans.

AAJ: Was there anything else led to this project?

PK: My relationship with Adrian Sherriff [bass trombone] was also important in terms of the formation of the group. I had been hanging out with Adrian a bit and was getting really into his playing. I really wanted to create a project with him and we both thought a brass ensemble would be a great challenge.

At the time I wrote the suite I was completing a Master of Music Performance degree at VCA (the Victorian College of the Arts in Melbourne) and having composition lessons with Mark Pollard. He certainly influenced my thinking, he is a great guy, really interesting composer with a really different approach to me. We had many fascinating discussions and he turned me onto to some new ways of doing things.

AAJ: You quoted TS Eliot as saying that poetry communicates at a completely different level than you might get by simply understanding the meaning of the words. Italo Calvino's work—including Invisible Cities—has this ability to communicate this way; to bypass thinking and go straight into experiencing. Did this play a part in choosing a work by Calvino to inform your composition?

PK: This was a huge part of it. I really didn't want to write 'programmatic' music, you know, where the music tries to represent something else. Music does remind us of things and deliver us to our own memories of things, but it is an abstract art. The closest I came to trying to represent something in the suite is in "Cities and Desire": in Zobeide (one of Calvino's pieces), the streets of the city wind 'skein-like' around one another. I tried to wind three melodic fragments around one another during the course of the music. However, essentially, I just wanted to respond to the 'feeling realm' offered in the writing and for the most part I just read the stories and tried to hear music. I wasn't particularly responding to narrative forms or anything else...in the end it's just music.

AAJ: Were you guided for each of the pieces by the content of specific pieces of Calvino's work or by some sense you gained from the work as a whole? Or were you guided by your own visions of invisible cities—Peter Knight's invisible cities? For example, the tune "Hypatia" seemed evocative of New York City.

PK: Yes I know what you mean, it is 'big city' music. And I was thinking of big cities when I wrote it. The chaos of the city. The myriad simultaneous, independent, and yet overlapping narratives that are going on at any moment in a city. I really love cities, I love walking in the city at peak hour in the crowd; that strange feeling of at once being engulfed and alone. These experiences and feelings definitely influence my music. I know that, and yet I can't really pinpoint the process by which they do.

AAJ: You've mentioned ee cummings as a poet whose work you love. How important is poetry to you as a musician and composer?

PK: It's really important. To be honest words were my first love. I was one of those kids who read books until 2AM every night and then had trouble waking up to go to school in the morning. I think I came to music later. And I am still really fascinated by words and how they work; how they create meaning. It's amazing to me that, in poetry, sometimes a series of words can make little immediate sense in terms of their explicit meaning, but still communicate a clear sense of something: beauty, sadness, violence...whatever. There is something similar for me about this process and that which arises when we listen to music. I mean, as I have already said, music is an abstract art. It doesn't really resemble anything, and yet it evokes a great deal. When I read cummings' poetry I am reminded of music somehow.

AAJ: The band 5+2 that plays on this CD is an interesting mix—just the combination of five brass instruments with bass and drums provides a distinctive sound. You lead and participate in a number of different groups. Tell me what you like about this instrumental line-up. What are its particular challenges for composition and performance?

PK: One of the things I really like is the sudden contrast from lush to sparse: as soon as the brass stops playing figures you are left with bass, drums and single line soloist... no chords. I have always liked the austerity of chordless jazz groups like Dave Holland's 80's quintet with Kenny Wheeler, as well as Aussie groups, Ish Ish, and Scott Tinkler's trio; and so I like that contrast in 5+2. I am also excited by the effects that can be achieved with breath sounds and tapping and other 'off-horn' techniques. The fact that there are 5 horns means that you can create a gesture with plenty of impact using these very quiet sounds.

The tricky thing about this line-up compositionally is that the brass sound can very easily sound like a number of things that we are very familiar with: it can very easily sound like a fanfare... you know that 'Roman Processional' sound, or it can sound like a Salvation Army brass band, or it can sound like half a big band. There's nothing wrong with any of these sounds per se, but it's frustrating when they emerge and they are not what you intended. I did a lot of experimenting with voicings before I arrived at the kind of sound that communicated what I wanted.

AAJ: Why did this group come together—a structured considered choice that was to do with combination of sounds? A group of musicians you like spending time with? A group of instruments you wanted to compose for?

PK: All of the above. I wanted to experiment with brass and with writing for a larger ensemble. I also wanted to play with particular people. Making music is a social activity so it's great if rehearsal can be a fun hang as well as being productive musically; this group achieves that.

PK: Certainly. I think that a lot of the hard work is done now. We have developed an 'ensemble' sound, approach, and working method. I'm really hoping we'll play at a few festivals and the like in the next little while and perhaps do a short tour. Then I am keen to start a new writing project for the group as I think we've really only just begun to scratch the surface of what's possible.

AAJ: The musicians in the group on this CD have some unique characteristics. What springs to mind Adrian Sherriff's gift with the bass trombone (and some of his unique sounds which are used with great effect on the CD) and Anita's classical training, which has also been mentioned by other musicians such as Andrea Keller as something that shows up as a differentiating aspect of her musicianship. When you write, do you think about the players in the group; not just about their instruments but about their strengths, their personalities and where they will be able and willing to go with the music?

PK: Yes, I'm always imagining who is going to be playing the music. I think this is particularly important when writing for improvising musicians because the composition is completed in their perfomance of the music. They are expected to bring ideas and their 'voice' to the work rather than just 'play the dots' as is more common in a classical setting. The music on Invisible Cities and Other Works is more detailed compositionally speaking than is a lot of jazz music, but nonetheless the improvisatory elements are incredibly important.

You're right when you mention Adrian and Anita as both being musicians with unique skills. They are both a hugely important part of the sound. Anita is one of the few bass players that can comfortably move from classical bass technique to swing. This offers me a lot of possibilities as a composer because she can operate as a voice within the brass section, rounding out the bottom end, and then move into a jazz rhythm section type role...it's almost like having an extra musician. Two for one!

AAJ: What projects are coming up for you?

PK: I have an album coming out on Jazzhead Records in the first half of next year that has already been recorded. The line-up is Colin Hopkins piano, Stephen Magnusson guitar, Frank Di Sario bass, and Tony Floyd drums, and me of course. This is more in the 'jazz' mold but Magnusson twists it into something else.

I am also composing a piece for a contemporary music concert series curated by the composer, Kate Neal, which also features the work of David Chisholm and Martin MacKerras. This will be premiered at BMW Edge in Federation Square (Melbourne, Australia) on Saturday 8th April by the Dead Horse Ensemble.

Visit Peter Knight and Rufus Records on the web. 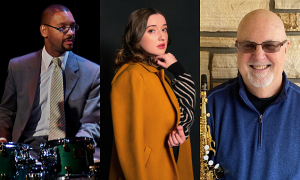 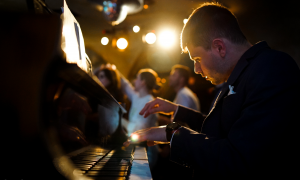 Based in Melbourne, Australia, Miriam edits extempore, a journal of writing and art inspired by jazz and improvised music