Maximize your visibility at All About Jazz by upgrading your musician page from standard to premium. With it, you'll receive All About Jazz home page exposure, a highly stylized / ad-free musician page with bonus features and benefits, an ad, plus you control where you sell your music and so much more.
Learn More
391

BY JIM SANTELLA
December 15, 2005
Sign in to view read count 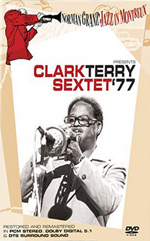 Produced by Norman Granz on July 14, 1977, this concert performance brought a superb group of all-stars together for a sterling session of straight-ahead fun. Clark Terry's sextet took on a challenging program of standards and interpreted each with the ease of veterans. An equitable ensemble balance was achieved, solos were passed around the stage, and each artist seemed completely at ease. Each of them proved that with big smiles all around.

Terry was in fine form, opting for the flugelhorn on most selections. His double and triple-tonguing entered the musical picture for the group's blazing-fast romps, while Terry's emotional outpouring captured the focus for ballads and blues. The camera work was so complete that you can watch the trumpeter's face as he moves through occasional bursts of circular breathing in order to achieve his lyrical and technical goals. Whether forming a melodic statement with seamless phrasing or driving forward at an ultra-fast tempo, he's careful to time each breath just right. It's that attention to detail that makes CT so special. Well, that and his unique feel for good jazz.

Ronnie Scott, Oscar Peterson, Joe Pass and Milt Jackson turn in solid solo spots as well as working cohesively in ensemble. The camera gets around to each and affords great closeups. At just under an hour, the program comes recommended for its all-star quality and for that special feeling you get while watching: as if you're there in the auditorium.