BY JOHN KELMAN
November 9, 2013
Sign in to view read count 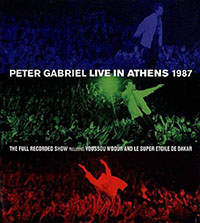 Count on Peter Gabriel to be ahead of the curve. In 1987, when he was touring his commercial breakthrough record So (Geffen, 1986), he was already thinking ahead (now that the MTV generation had made the value of videos clear) to the potential of recording and releasing concert videos from each of his major tours.

Since that time he's done just that, though considering the amount of time between tours that hasn't really amounted to all that much, with the British singer—and co-founder of initially less financially successful progressive rock group Genesis that may have attained greater immediate success in the years after he left, but whose albums with the singer/songwriter have since ultimately outsold those more dispensable '80s hit records—releasing only Us (Real Word/Geffen, 1992) and Up (Real World/Virgin, 2002), before turning to his recent orchestral projects, Scratch My Back (Real World, 2010) and New Blood (Real World, 2011), where he revisits his own back catalogue (no Genesis, though), along with some favorite songs by other artists, ranging from Paul Simon and Randy Newman to Arcade Fire and David Bowie.

But his first concert video, PoV (Virgin, 1990)—while a thoroughly captivating document, released on VHS tape and laserdisc, of his band's 1987 show in Athens, Greece—was both incomplete and, interspersed with all kinds of home film-level behind-the-scenes footage, never quite as successful as later live videos, in particular Secret World Live (Real World/Eagle Entertainment), remaining the only Gabriel live video that has never been made available on DVD (well, it has, but by bootleggers who ripped the original laserdisc and sold illegal DVD versions). That it was a much leaner production—both in terms of visuals and the size of the band—PoV has nevertheless remained a highly regarded (if not somewhat frustrating) document of Gabriel, just as he was making the leap from the cult figure of his first four recordings to that of pop superstar; frustrating, because the assumption has long been that tapes of the entire Athens show have been sitting around, gathering dust, while fans of PoV craved the opportunity to see and hear them.

The good news is that, with the 25th Anniversary Immersion Box version of So—released in late 2012 by Real World Productions that, in addition to the album, remastered for CD and 180 gram vinyl, also included a second LP with two previously unreleased tracks, a 90-minute documentary DVD about the making of the album and So DNA, a disc revealing, through various versions of tunes in various forms morphing from humble beginnings to finished form)—the entire Athens show has finally been made available—both on two CDs and on DVD. However, it comes at a not-insignificant price and, while a budget version of So, with the remastered album and two-CD audio version of Live in Athens, was released concurrently, the video remained something exclusive to those prepared to invest in the Immersion Box.

Coming nearly a year later, the separately released Live in Athens 1987 is strictly either DVD or Blu-Ray, and finally provides an opportunity, for those who didn't want to cough up over $100 for the Immersion Box, the chance to see the Athens show in its entirety, in sequence and without any of the disturbing interruptions of the PoV video. As an added incentive, Live in Athens 1987 also comes with Play: The Videos (only on DVD, regardless of the format chosen for the Athens video)—originally released by Rhino in 2004 and collecting all of Gabriel's music videos, including the groundbreaking video for his breakthrough hit "Sledgehammer," which won a record nine awards at the 1987 MTV Video Music Awards (the most awards a single video has ever won andthe most played video in the history of MTV).

But as entertaining as many of Gabriel's videos are, the inclusion of Play really is just a bonus; it's the Athens show that's the meat of this two-disc set, and is especially significant since Gabriel reunited the entire band—keyboardist David Sancious, guitarist David Rhodes, bassist/stick player Tony Levin and drummer Manu Katche—for his "Back to Front Tour" that, occupying much of late 2012 and 2013, opens with a brief acoustic set and an electric set of some of his other material, before taking an intermission, followed by a complete performance of So, from start to finish—including some songs that were never previously performed live.

Of course, 1987 Gabriel looks a lot different than the 2013 edition, with less girth, more hair (on the top of his head, at least) and a voice that, being 25 years younger, was as husky as it ever was, but hadn't lost some of the upper range that is often the inevitable consequence of aging. While there are some things that link the performance to its time—in particular the clothing—the performance itself has weathered exceptionally well...better, even, than his subsequent live videos. To some extent it's the very leanness of this band—future tours would feature larger groups—that allows, even within the clearly rigid constructs of Gabriel's arrangements, for it to be a little looser, a little freer and a lot more exciting.

Gabriel's live arrangements for this group are significantly improved over those played by the group heard on Plays Live (Geffen, 1983)—which was in support of his fourth studio album, also called Security (Geffen, 1982) and, while also featuring Levin and Rhodes, was fleshed out by drummer Jerry Marotta and keyboardist Larry Fast. As good as Marotta has always been, Katché lights a fire under this band, especially on the back-to-back set of four tunes from 1980's Peter Gabriel 3 (also called "Melt," on Charisma/Mercury), and particularly with the thundering, gated drums of "Intruder," the up-tempo funk of "Games Without Frontiers" and equally pulse-laden "No Self Control." It's these rhythmically revamped arrangements that are some of Live in Athens' most exciting, if for no other reason than they're so different from the more avant-tinged studio versions, and one more sign of the success that So co-producer Daniel Lanois had in convincing Gabriel to allow cymbals back into his music and much more serious grooves as well.

What differentiates Live in Athens from the DVD included in the Immersion Box is the opening 40-minute set by Senegalese singer Youssou N'Dour (who sings with Gabriel on the studio version of So's "In Your Eyes") and his group, Le Super Etoile de Dakar. The opportunity to experience the entire show as it was presented—with a very much considered opening act, who would return to the stage for two of Gabriel's three encores, the longer version of "In Your Eyes" and anthemic "Biko"—is something rare in concert video recordings; normally only the headline act is presented. While it's almost a certainty that the majority of Gabriel fans will watch N'Dour's show once or twice while returning to the Gabriel segment far more often, the value of having the entire two-and-a-half-hour concert cannot be understated.

Gabriel's stage presence had always been commanding; even from his early days in Genesis, he was conscious of theatrics and costuming. But by the time of So and Live in Athens 1987, much of the low-tech costuming of early Genesis was gone and in its place, a far more professional performer whose every move was choreographed, as were those of his band mates. That they looked, for the most part, so natural is what has long given Gabriel his edge as a performer. He employed a super-clean stage where every square inch nevertheless had a purpose that ultimately revealed itself—whether it was a series of lights on moving arms that seemed to attack him during "No Self Control," or a platform that allowed him to literally fall into the crowd during "Lay Your Hands on Me," body surfing and having the kind of direct contact with his audience that would be largely unheard of today (though by the time he made it back to the stage, his white coat was gone, torn to shreds).

That part of "Lay Your Hands on Me" may well, in fact, be Live in Athens' most powerful moment, if only because of the trust that it implies between Gabriel and his audience. But the entire Gabriel portion of the show Is attention-grabbing, from the very opening "This is the Picture (Excellent Birds)," where Gabriel brings the entire band to the front line with guitars and Keytars to be introduced, most unusually, at the show's start, through the sequencer-driven tour de force "San Jacinto," more propulsive and catchy "Shock the Monkey" and oblique contrasts of "The Family and the Fishing Net." That only four tunes from So are in the set list only demonstrates Gabriel's counter-approach to live performance. With So breaking him through to a larger audience, he still ensured that plenty of material from his earlier records—and not just the more user-friendly songs—were included.

Everyone in the band looks and plays great, and there's plenty of camera work devoted to giving them some air time, but it's ultimately Gabriel's show and he naturally dominates without ever seeming disconnected from his group. When N'Dour and Le Super Etoile de Dakar join Gabriel's group for "In Your Eyes" and "Biko," the warmth shared amongst everyone onstage is palpable.

There are also two bonus features on the Live in Athens disc: An interview of Peter Gabriel by Paul Gambaccini, which reveals him to be a charming, self-effacing and articulate subject; and a 5.1 surround mix of the "Sledgehammer" video." But these are just icing on the cake; fans have been waiting to hear the show behind PoV for nearly 25 years; now, finally, not only do they get Gabriel's entire show, uncut and in sequence, but the opening act as well, which makes their return for Gabriel's encores all the more compelling. Live in Athens 1987 captures an artist on the cusp of greater success, and few artists have deserved it as much as Peter Gabriel—who has, since then, invested much of his time, energy and money in bringing music from other cultures to the world. Live in Athens 1987 is where it all begins.