Mika Stoltzman: If You Believe

BY DAN BILAWSKY
November 9, 2013
Sign in to view read count 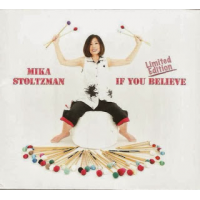 In jazz, the marimba tends to be dwarfed by its sustain-friendly metallic cousin, the vibraphone. Many fine vibes players, like Bobby Hutcherson and Stefon Harris to name just two, double on marimba, but that instrument always comes second for them—and for most jazz mallet players—and it almost never dominates a program; almost is the key word, as there are exceptions to that statement. A select few are willing to put the marimba first and Mika Stoltzman is one such individual.

The Japanese-born, New York-based Stoltzman isn't necessarily a jazz artist, as she's pitched her tent in various musical camps over the years, but she's one hell of a musician regardless of the stylistic tag(s) thrust upon her. Stoltzman made a name for herself in minimalist circles by appearing on Steve Reich: Triple Quartet (Nonesuch, 2001), and she turned some heads in the classical world by working with her husband—clarinet icon Richard Stoltzman—but none of that defines her. Mika Stoltzman is beyond category, to use Duke Ellington's signature compliment, and she proves it here.

Stoltzman is joined by a stellar cast, including album producer/drummer Steve Gadd, bassist Eddie Gomez and her clarinet-toting husband, on a diverse program of music that was written or arranged expressly for her. In tackling this music, she moves through different corners of the world, from Brazil ("BECO") to Ireland ("Irish Spirit"), and explores various moods, from the funereal ("Pavane") to the cheery ("Cantabile"). She also gets down and dirty ("Funky Little Fugue"), adds a dose of tropicalia to the mix ("The Last Mojitos"), and makes her mark in intriguing realms ("Marika Groove").

Stoltzman proves time and again that she's a brilliantly borderless artist, but she's hardly the only game in town on this album. Her husband comes close to eclipsing her, as he melts the heart on the "Ballad" section of "Irish Spirit" and struts along on "The Last Mojitos," Gomez and guitarist John Tropea each get a few opportunities to step into the spotlight, and the Gadds—Steve and Duke—both do a fine job behind the kit. The presence of the Harlem String Quartet on a few tracks is the icing on the cake here, adding yet another dimension to this oh-so-unique album from this one-of-a-kind musician.

Title: If You Believe | Year Released: 2013 | Record Label: Self Produced