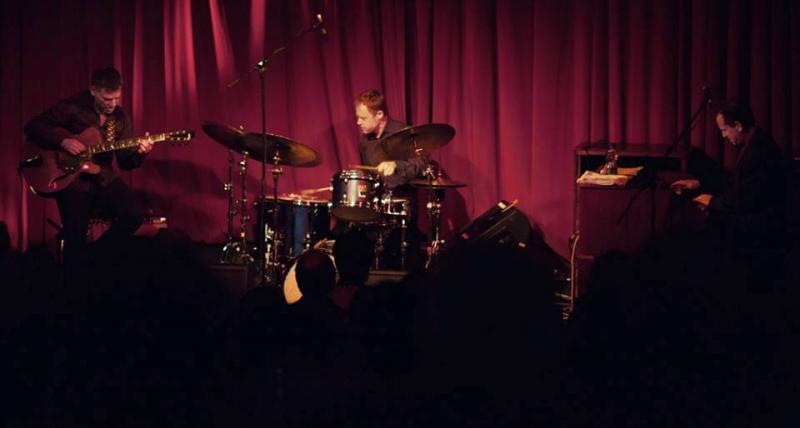 The healthy queue outside The Sugar Club—a mixture of oldies, professional musicians and music students from Dublin's Newpark Music Centre—was testament to the enduring appeal and influence of one of jazz's longest running trios. It had been a dozen years since guitarist Peter Bernstein, drummer Bill Stewart and organist Larry Goldings last played in Dublin so there was a palpable air of excitement amongst the crowd.

The trio's recorded output may have slowed, with Sweet Science (Palmetto Records, 2002) and Live at Smalls (Smalls LIVE, 2011) a somewhat meager return in the past decade, but regardless, this crowd knew what it was going to get; there are precious few trios around with such a heightened degree of empathy and whether playing slow or fast these guys always burn.

After the introductory fireworks of "Subtle Digs"—crowned by Stewart's explosive finale—the trio introduced the first of several new compositions. The working titles or absence of titles suggested that these tunes are still being kneaded into shape in the on-stage laboratory but there was vibrancy about them that augers well for the 2014 release. Both Goldings "Mr. Meagles" and Stewart's non-baptized tune provided set highlights.

The former tune was a portrait in contrasts, with Goldings' quietly simmering organ serving as the backdrop while Bernstein and Stewart stretched out with a sense of urgency. The latter number was a smoldering blues; sultry organ and steamy guitar lines intertwined, punctuated intermittently by dramatic cymbal crashes. An extended guitar vamp at song's end provided a platform for Stewart to strut his stuff. Watching the drummer's tremendous rhythmic flow, thrilling dynamism and strict control was akin to witnessing a master juggler manipulating multiple clubs.

Goldings' announcement that guitarist Jim Hall had passed away the day before was sad news indeed, and no doubt felt by those in the Sugar Club. A poignant rendition of "Body and Soul" was dedicated to Hall, with Goldings' hushed Hammond lines as soft as Stewart's brushwork. All three musicians had played and recorded with the influential Hall over the previous two decades and their playing was evidently heartfelt.

Bernstein's "Just a Thought" saw Stewart move between brushes and sticks as Goldings' walking bass line upped the momentum. Though the battered-looking Hammond organ looked as though it wouldn't raise more than $100 on EBay, Goldings' measured solo was a delight, as was Bernstein's response, who was clearly also in the mood. All three musicians shone under the individual spotlight on "The Acrobat"—a groover of classic Blue Note design, if not actual vintage—though the most arresting dialog of the tune—and throughout the evening—was the collective one.

Another Bernstein number, "Jive Coffee" saw the guitarist's Wes Montgomery and Grant Green roots break the surface. The song fairly crackled with energy and Stewart's solo over an organ vamp and guitar chords was electrifying. From its firey beginning the tune finished on the most delicate of notes, with Bernstein's feathery touch quietly mesmerizing.

A beautifully tender reading of "Every time you say Goodbye" served as the inevitable encore. The musicians may well have had their friend and colleague Hall on their minds as they caressed the melody during an emotionally charged rendition. "We'll dedicate that to Jim Hall too," Goldings said through the applause. The tribute to Hall's memory struck the final—and most fitting—chord of an absorbing evening's music.