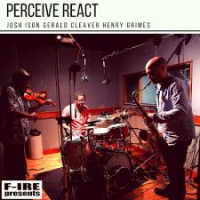 The road to saxophonist Josh Ison's debut recording Perceive React is a very interesting one of connecting up with and finding players whom one admires, asking them to take part in a recording session, their acceptance, and finally their meeting for the first time and clicking impressively.

Ison had been concentrating on finding the core of what it means to be in the moment and ego-less when improvising in a free setting. He happened to hear bassist Henry Grimes play with Marc Ribot at Cafe OTO in London, and ended up being able to jam with Grimes all afternoon the next day, getting some helpful pointers that really helped him. Grimes accepted Ison's invitation to record.

Drummer Gerald Cleaver came into the picture through Ison's listening to his work in the Ellery Eskelin trio with Drew Gress. Cleaver is very comfortable in free contexts and accepted Ison's invitation to take part in the recording.

Grimes and Cleaver had never played together, and Ison had never played with Cleaver when they met to record a completely improvised, totally spontaneous session. The two tracks on the album, the first just under seventeen minutes and the second just over twenty-five minutes, are Ison's favorites of the session in which he endeavored to "perceive" and "react" to what Grimes and Cleaver were doing in a circular manner where everyone else is doing the same thing.

Free jazz is as demanding on the listener as it is on the players. The process becomes the important thing, and the entirety of the produced sound needs to be heard as it changes moment to moment. While of course each player can be heard individually, it is the interactions between them that matter, as well as how the entire group produces music that organically develops and moves forward. Time takes on a special meaning in that the "end" cannot be anticipated by the players or the listener, and in the best sessions feels very natural when all agree to close.

That said, Perceive React is a wonderful example of the genre. The music crackles with energy and intensity. Naturally Ison is out front when he plays, but Cleaver, and especially Grimes lead as much as they follow. It is fascinating to hear the music's texture and sound logically mutate from one minute to the next.

Cleaver is a very giving player and he drops out for minutes at a time to as Grimes (who also plays violin) and Ison get particularly entwined. For his part, Ison's playing is quite melodic at times (reminding this listener of François Carrier), but it also maintains coherence in the free, "fire" sections. Grimes is flat-out amazing on both bass and violin as he creates sonic auras behind Ison, all the while switching between pushing and pulling instantaneously.

In the end, there is much beauty to be heard, even in the more shrill and dense sections. Sympathetic listeners will find themselves inside the session itself and get carried away by its power, intelligence and yes, pyrotechnics.

As a debut, Ison has made a big splash. He more than rose to the occasion, as well as providing sensitive support for Grimes and Cleaver. Marvelous all the way around.