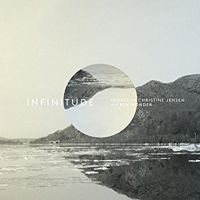 On paper and with this line-up you might be forgiven for regarding this as a new version of the Brecker Brothers with the two West Canadian Ingrid Jensen and Montreal-based sister Christine taking the roles respectively of Randy Brecker and the sorely missed Michael. But this would be a mistake. The Jensens have carved out their own distinct sound and having worked in big band and smaller ensembles with such luminaries as Clark Terry, Maria Schneider and Terri Lyne Carrington, they were keen to write and record for quintet. Their debut album for Whirlwind also features virtuoso guitarist Ben Monder notably heard on David Bowie's album Blackstar, released two days before his death.

The opener, "Blue Yonder" employs the horns in a languid, ensemble role to state the irresistible theme and following Christine Jensen's soulful alto solo, Monder lays down a fiery solo as in stark contrast. On "Swirlaround" Christine Jensen is first heard soloing on soprano saxophone swiftly followed by Monder on distortion-driven guitar. Ingrid Jensen is next to solo on trumpet producing a range of notes from growling low to soaring high. All the while the horns provide ensemble punctuation to this slowly measured piece.

With an undercurrent of delicate finger-picked guitar, "Echolalia" sees Ingrid Jensen soloing with swirling, florid articulateness. Sister Christine solos on alto on the tranquil yet affecting "Octofolk." Ben Monder dramatically bursts-in midway and without warning on the deceptively languorous "Duo Space." The drone of horns is joined by the keen tom-tom beat of Jon Wikan's drums on the strident near-blues of "Old Time" whilst a memorable theme is repeated to a sudden sharp ending.

"Hopes Trail" begins tranquilly, the horns taking an ensemble role to state the theme, following which the piece rapidly unfolds. On the pastoral "Trio: Garden Hour" Monder plays the unusual Hammertone guitar, a cross between an electric mandolin and a 12 string guitar, and produces an intriguing, almost harp-like resonance. On "Margareta" Christine Jensen's limpid alto solo is succeeded by her sister's searching trumpet solo and an overdriven raging guitar solo from Monder. The quieter finale "Dots and Braids" is an eloquent vehicle for trumpet and saxophone extemporization.

The device of juxtaposing calm sheets of sound with often furious solos, especially from Ben Monder is an effective one and hold's the listener's attention throughout. The album oscillates satisfyingly from ECM-like atmospherics to far more visceral sections. It also achieves a rare distinction of being able to simultaneously combine tranquillity with rhythmic vibrancy, coalescing in a near hypnotic fusion of tone and colour. A rare delight.