BY DAN MCCLENAGHAN
March 23, 2012
Sign in to view read count 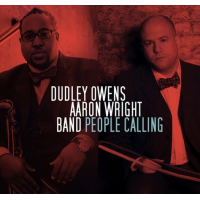 Dudley Owens / Aaron Wright Band's People Calling, in the best possible sense, doesn't settle into any category. The title tune, introduced early and reprised at the end of the disc, walks a line between the spirituality-steeped sound of saxophonist John Coltrane's classic sixties quartet and the soulful and catchy style of vocalist/songwriter/producer Curtis Mayfield. The result is stirred with social consciousness, with drummer Clif Wallace's low-in-the-mix vocals repeating "Oh, the people calling" much in the manner of the chant on Coltrane's classic A Love Supreme (Impulse!, 1965).

The set's brief opener, "R.O.," brings the Coltrane quartet to mind with a wandering, searching drift centered on Aaron Wright's bowed bass and Willerm Delisfort's shimmering piano. "R.O." coalesces into a brief groove that leads into the title tune. Dudley Owens, who plays mainly tenor sax on the set, switches to soprano on his original, "Elijah," for a relaxed, pastoral mood. The Wright-penned "Jovan" rolls into straight ahead quartet jazz, with Owens sounding alternately forceful and burly, and Ben Webster smooth.

The disc features all original compositions, seven by Wright and four by Owens, with cohesion provided by a search for deeper meanings that translates into a timeless sound. Wright's "Y.A.G.M.G.D." is a sax/bass/drums offering that recalls Sonny Rollins' freer work in the format. Owens blows fiery notes over the Wright/Wallace groove which gearshifts into a racing tempo.

Trumpeter Justin Stanton joins the core quartet on four tunes. Owens' "Book of Revelations" is five-and-a-half minutes of modal urgency juxtaposed with searing two-horn interplay. This leads into the soulful, Wright-penned "Magnolia," with contrasting horn styles—a gruff tenor sax versus a mellifluous trumpet—on a couple of heartfelt solos from Owens and Stanton.

People Calling is one of those rare outings where everything comes together. Excellent songwriting, stellar playing and superb sound quality are captured on a recording wrapped in a beautifully designed CD package with a cover photo that says, accurately, classic sounds.