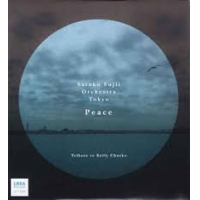 If pianist Satoko Fujii is known for anything, it is for the enormous amount of energy that she brings to her work, plus the pace she maintains with groups scattered all over the world.

Her latest offering, Peace, with her Tokyo Orchestra was recorded in 2014, as was Ichigo Ichie (her Berlin Orchestra), Uminari (the Kaze quartet) and Yamiyo Ni Karasu (the Tobira quartet), making for quite a year.

Peace is a tribute to guitarist Kelly Churko who lived in Tokyo, was part of the Tokyo Orchestra (see Zakopane) and played with Natsuki Tamura (Fujii's husband) in his First Meeting quartet (see Cut The Rope), and who died of cancer in 2014.

Churko was quite active in the "noise" music scene and created deep and strong friendships with whomever he played. The music Fujii has created evokes his memory not only as a musician but also in the relationship he developed with her and how his death affected her.

The result is music that is enormously powerful and very rich but with a strong, deeply personal feeling. The Tokyo Orchestra is Fujii's instrument and here she conducts rather than plays. It should be noted that Peter Orins and Christian Pruvost (who are both French) from Kaze play as guest artists, adding to the Orchestra's forces. Fujii's compositions are but the starting points for the players, and they, together with Fujii's conducting, produce the final music with everyone improvising within the original framework.

Despite the sometimes (very) raucous and dense sound, the thread of purposeful structure can be intuited, although there are many moments when there is nothing to do but to let the sound crash around and over you. What is amazing, even after all of these years, is that despite a particular group's instrumentation is, or the music's basic style, what is heard is immediately recognizable as Fujii.

The recording opens with with the nearly thirty-three minute piece, "2014," the current year at the time and that of Churko's death. The music landscape which is created by Fujii and the Orchestra is highly varied and huge. "Jasper," named after a friend's cat that seemed to have a connection with Tamura is overtly beautiful and sounds much like an elegy with the undertones of a dirge due to its pedal note. "Peace" is dedicated to Churko and its full-throttle sound is much closer to his music taste than his demeanor. "Beguine Nummer Eins" has a (surprising ?) clear melodic, rhythmic and harmonic structure and acts as aural refreshment and a denouement from the earlier energy.

In reacting to the passing of Churko, Fujii has created some of the most intensely personal heard anywhere or anytime, and for that Peace is an amazing listening experience.