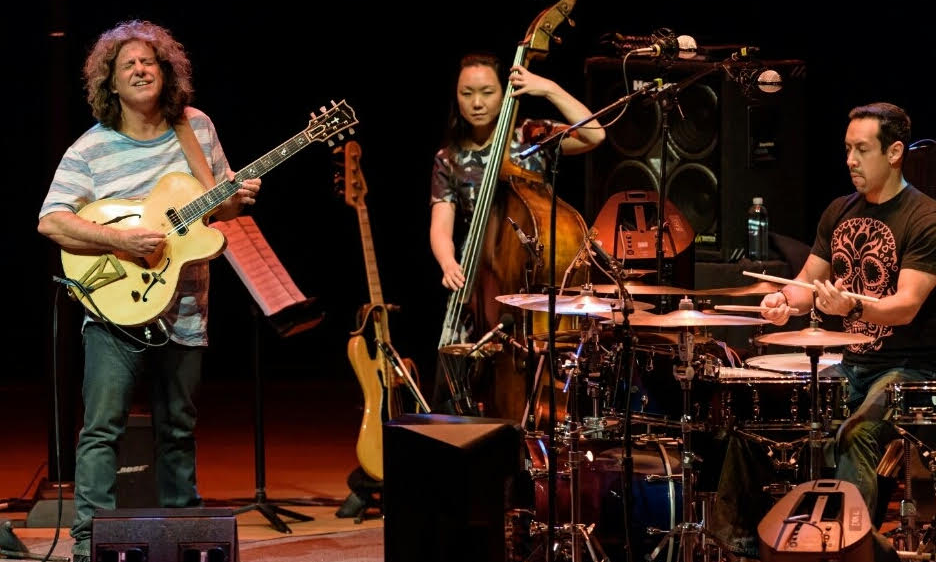 I have covered the jazz "waterfront" for All About Jazz over the past two decades and although I have taken in a lot of territory, I often find myself aware of major gaps in my listening. Even an all-time legendary jazz musician can be a "missing person" on my list. When I read the news that the great ground-breaking guitarist Pat Metheny was going to be in Philadelphia as part of his current tour, it hit me that, although I probably heard him casually on the radio, I never bought one of his records or attended any of his performances. How could this be? I felt humbled and immediately got a ticket for his show. Therefore, although I boned up a bit on Metheny's history and guitar arsenal, this review reflects no expertise on my part, but is an impressionistic description of my experience of music I was literally hearing for the first time. I was not familiar with most of the songs, and Metheny did not name any, possibly because the audience-with the exception of myself—knew all of them. My sincere apologies to his legions of fans for my shortcomings!

When Metheny—and subsequently his co-musicians UK pianist Gwilym Simcock, Australian/Malaysian born bassist Linda May Han Oh, and drummer Antonio Sanchez, who wrote the score for the Birdman movie—came on stage, I was aware that I was a lonely know-nothing in an audience of enthusiastic fans, many of whom have followed Metheny for years. But I waxed with enthusiasm when Metheny started out with an extended solo on what I later learned was his custom-made 42-string Pikasso guitar. Within a few minutes, I became aware that I was in the presence of a master musician with enormous creative power and imagination. He was all over this astonishing instrument, playing beautiful sounds with varied sonorities, lines, and harmonies. Throughout the evening, I could feel the influence of Metheny's connections to Weather Report and its quintessential bass guitarist, Jaco Pastorius. Much of Metheny's musical vocabulary must have been honed in that milieu. But there were myriads of other influences as well, from the Beatles to bebop, hard bop, and fusion, to mention a few. Metheny's expressions are kaleidoscopic.

Following his solo, the group came on stage. Together, they relentlessly delivered solid performances for over two hours with no break, more than anyone could ask for. Metheny seemed to be a bundle of pure, tireless energy with not the slightest sign of breaking a sweat! Often, he switched among his several instruments, the most stunning of which was his Roland GR-300 guitar synthesizer, with which he catapulted into the stratosphere with a compound of acid rock, jazz improvs, and soul music that shook the house. At other times, by contrast, he could use a standard six-string guitar to play ballads with simplicity and grace. He has developed a musical language and a resilient technique that allow him to go between instruments, styles, and genres as if they are all part of a larger whole.

His co-musicians, pianist Simcock, bassist Han Oh, and drummer Sanchez were in perfect synch with Metheny, neither overshadowing him (which is well nigh impossible) nor holding back, but always aware of working as an ensemble. Simcock's piano was muted with a soft padded cover and amplified, giving it a gentler, less percussive sound, and he carefully articulated his comping and solos with an awareness of every note he played. Han Oh gripped her acoustic upright bass tightly, providing a solid bass line, always sensitive to the rhythmic pulse and chord changes. Drummer Sanchez carried forth a rock agenda but with the flexibility and sophistication called for by Metheny's playing. Later in the evening, Han Oh and Sanchez each did duets with the guitarist that were magnificent in style and content. Han Oh masterfully developed melodic and harmonic sequences, and Sanchez used his full, expanded drum set to explore unusual rhythms as well as the sophisticated use of the spaces between the beats.

As a jazz aficionado who usually haunts small clubs and has only rarely attended a rock concert, I congratulate Metheny and his group for making masterful music that also has the ability to "tear down those walls" of genres and styles and brings jazz into conjunction with the roaring pop culture sounds that can sonically fill a stadium and appeal to multiple generations of listeners. This group is on world tour for the next few months, so if you are on the same wavelength with them, you may have an opportunity to hear them live in your neck of the woods.