BY NENAD GEORGIEVSKI
October 10, 2018
Sign in to view read count 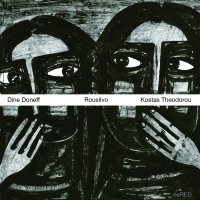 There is more to bassist and composer Dine Doneff's record Rousilvo than simply a blending of styles and genres and eras and approaches. Certainly among his many talents is his uncanny ability to blur the line between the avant-garde, free-improv, classical, world music and jazz. It's a maneuver he has perfected over the years as the leader of his adventurous projects or as a sideman musician in other bands. With this project, Doneff certainly expands on that aesthetic and dives deep into his past.

Rousilvo is the Slavic name of a village of Doneff's birth in today's Northern Greece that is now known as Xanthogeia. The village is abandoned now as are many villages that were once populated by Macedonians in this region also known as Aegean Macedonia. Even though Doneff has resided in Germany for the past several years, he is a descendant of the Macedonian community that has survived years of series of ethnic cleansings and forced Hellenic assimilation of the Slavic population in Greece. Not only were Slavic names to cities and people changed but the word Macedonia was forbidden for use. It's an ongoing clash and struggle that still has not been forgotten. Even today, on the eve of the historic agreement between Macedonia and Greece, the term Macedonia and its citizens still pose a problem which hopefully will resolve with this agreement.

Effectively depicting the struggles of the Macedonians during that era presents a challenge for anyone, but Doneff has been able to channel his emotions into his skills as a sensitive and free-thinking composer. And for this album, he dives deep into his past and emotions in order to come out with music that is emotional, spiritual and panoramic. Rousilvo is like a musical drama with several suites with spacious, clean, disciplined arrangements and long, reflective, graceful and mournful improvised melodic lines. In between the compositions, he inserts elderly women singing acapella songs and laments which adds weight to this music. These were recorded on locations scattered throughout Northern Greece. Much of what he reconstructs is a picture of people's lives from a bygone era or that were either killed during the Civil War in Greece or have fled across the borders to run from the ethnic cleansing that ensued when the Civil War ended. That mournful feel is an elegy to the uprooted people, a part of his childhood memories

As a musician, Doneff's thrives on empathy. His musical inspirations have come in response to his experiences and memories. As a result, it follows that Doneff would seek out empathetic musicians and provide them with open-minded compositional vehicles that deliver myriad opportunities to share that emotional load. Rather than the standard supporting role, the musicians here have unusually lyrical, impressionistic contributions that seem to be as much a part of the narrative, thus advancing the overall moods and themes.

This record is a debut release on the author's own label neRED which is strongly supported by the German record label ECM from Munich, both distribution and promotion-wise. The artwork is also done by Fotini Potamia who has also worked on ECM's recent cover art designs. All of this may also reveal why the production qualities on this record closely resemble this renowned label's own.

Rousilvo stands up even if the listener is not aware of the subject matter, but knowing the backstory definitely helps. This work is Doneff's most personal project, and he has laid his soul bare. If in the end we are the sum of our experiences, then the work of the musicians is a reflection of the events that touch our lives. Rousilvo is a spiritual narrative that explores the depth and the vast range of human emotions.