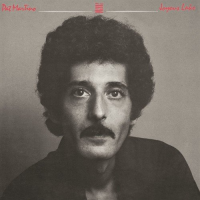 Seemingly a hardcore mainstreamer at heart—though one with no shortage of experimental élan, proven over a series of ten albums from 1967's El Hombre (Prestige) to 1976's wonderful duo with pianist Gil Goldstein, We'll Be Together Again (Muse, 1976)—guitarist Pat Martino came relatively late to the jazz-rock fusion game. His first album to truly plug in, his 1976 Warner Bros. debut, Starbright, was an eclectic affair that mixed synth and electric piano-laden interpretations of original music and a couple of wonderful Wayne Shorter covers ("Fall" and "Nefertiti"), with Martino moving comfortably from acoustic guitar to, for the first time, a more overdriven electric tone that still retained the inherent darkness of the sound with which he'd become known.

But it was with today's Rediscovery, 1977's Joyous Lake, that the increasingly well-known and already influential guitarist from Philadelphia took the big dive into electric waters, with a crack band of then-largely unknowns—keyboardist Delmar Brown, who would go on to work with everyone from Bob Moses and Miles Davis to Sting, electric bassist Mark Leonard, and a drummer whose muscular and effervescent style would see him go on to work with everyone from Stanley Jordan and David Fiuczynski to Robin Eubanks and The Manhattan Transfer: Kenwood Dennard.

From the opening "Line Games"—one of three Martino originals that are augmented by two from Brown (the atmospherically charged "Pyramidal Visions" and at least initially more relaxed "Mardi Gras") and one from Dennard (the fast funk of the Herbie Hancock- informed "M'Wandishi")—the entire group charges out of the gate. A fiery tune with a characteristically knotty theme, it demonstrates that Martino may have plugged in with a more overdriven tone, but his bop-drenched lines still speak of his mainstream background...a differentiator from most fusion of the time in that it truly never loses site of where it came from.

"Song Bird" is much longer (twice the length of "Line Games") and, with its stop/start elliptical theme, something that dates back, conceptually, to earlier Martino tunes like "The Great Stream," from Live! (Muse, 1974); but, with Brown, Leonard and Dennard's powerful support, it still possesses the fire and energy of fusion, even if Martino's tone and playing really hasn't changed much...only the context has. Similarly, the aptly monikered title track that closes the disc, with Brown doubling Martino's clean-toned theme, is something that could easily be transferred into a more acoustic setting, with its Latin tinge and propulsive rhythm.

Still, Martino's experiment with an early guitar synthesizer on "M'Wandishi" suggests he was open to atypical textures, even as he ran rapid eighth-note lines over Leonard and Dennard's muscular groundwork.

Sadly, Joyous Lake was given only a lukewarm reception and, after a brain aneurysm that left the guitarist with amnesia so complete that he had to literally relearn his instrument again through listening to his existing body of work, Martino's return to performance and recording in the late 1980s was also largely his homecoming to the more mainstream vibe of his pre-Starbright recordings. Still, the guitarist subsequently saw fit to reunite the group (calling it Joyous Lake) for one record: 1998's Stone Blue (Blue Note), adding saxophonist Eric Alexander to the mix and substituting James Genus for Mark Leonard.

But for those who enjoy their fusion with a stronger tie to the tradition, even as its grooves and colors are irrefutably electric and in their energy, electrified, Joyous Lake remains an undervalued gem in Martino's discography, and one that absolutely merits Rediscovery.