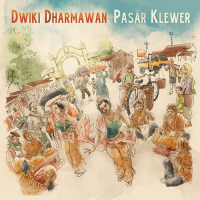 Another day, another two- disc set. Or so it seems. Fortunately, one does not have to wade through Dwiki Dharmawan's Pasar Klewer. Despite some odd choices in track sequence one may even wonder ..."is that all?" after the second disc has finished its spin. Dharmawan is an Indonesian jazz pianist who, like so many of his countrymen, has found a rich vein of inspiration in the folk and ethnic musics of his native land. It's worth noting that Dharmawan is a highly regarded jazz pianist, composer, arranger and peace activist who's been on the scene for over thirty years. Pasar Klewer is the follow- up to Dharmawan's first album to be issued in North America, So Far, So Close (MoonJune Records, 2015). Backed by the MoonJune Records house rhythm section of bassist Yaron Stavi and ace drummer Asaf Sirkis, Dharmawan is free to wander all over the modern jazz stylistic map. And the choices here aren't limited to modern jazz, as evidenced by Dharmawan's skillful cover of "Forest" by ex-Soft Machine drummer / vocalist Robert Wyatt. He's joined by reedman Gilad Atzmon and guitarists Mark Wingfield and Nicholas Meier on about half of the set's eleven tracks. Other tracks feature a full Gamelan orchestra and Indonesian vocalist / multi- instrumentalist Aris Daryono.

While So Far, So Close had a strong jazz-rock fusion orientation—featuring the leader on Mini-Moog, Fender Rhodes, and Hammond B-3- -the keyboard component on Pesar Klewer is 100% acoustic piano. Yet, it's no less a musical fusion than its predecessor. This is best exemplified on "Pasar Klewer" and "Tjampuhan" on CD 1, and on "Lir Illir" on CD 2, where Dharmawan addresses the relationships between Indonesian music and modern jazz in unexpected and startlingly creative ways. On the title track, a blistering fusion jam is subverted by Daryono's vocals, wailing rebab (a 3- stringed violin), and sparkling, bell-like Gamelan percussion. The first half of "Tjampuhan" intercuts the Gamelan orchestra with a series of amazingly frenetic piano trio passages before transitioning to a balladic pace for Atzmon's beautifully emotive soprano saxophone improvisation. The first several minutes of "Lir Illir" are absolutely otherworldly, with Peni Candrarini's spooky multi- tracked vocals and Daryono's gauzy rebab filling the spaces in between Dharmawan's somber piano chords while the Gamelan orchestra lurks in the background. Somehow this transitions to an extended, and quite muscular, up-tempo jazz piano trio workout. "Bubuy Bulan," a folk ballad popularized by pop singers Nina Kirana and Diah Iskandar in the 1960s, gets a lovely rhapsodic interpretation with Atzmon's richly evocative clarinet front and center. Atzmon's wailing klezmer- style clarinet is also quite effective on Dharmawan's Middle Eastern-flavored "Spirit of Peace."

The question of fusion crops up in a different way on both versions of "Forest," which is basically an altered blues tune with doomsday lyrics. Vocalist Boris Savoldelli takes some thrilling stylistic liberties with the vocal, which he is able to augment electronically in real time. He doesn't overdo it, which gives the piece additional depth. If anything, this piece displays Dharmawan's complete grasp and profound understanding of Western pop music. On the other hand, Savoldelli's bionically-modified scat vocal on "London In June" is a distracting presence, adding little to an otherwise sterling piano trio improvisation.

Guitarists Wingfield and Meier acquit themselves quite nicely throughout the 2-disc set. Wingfield's liquid electric guitar lines inflame the title track and Asaf Sirkis' dynamic jazz foray "Life Itself" with a white-hot fusion edge, while Meier chips in an all-too-brief solo spot on "Spirit of Peace." Meier plugs in for "Frog Dance," one of the most conventional pieces on the album. Aside from Atzmon's acrobatic, scene-stealing soprano solo, this one sounds like a lost Pat Metheny tune circa American Garage (ECM Records, 1979). Meier's also aboard for "Purnama," a slower, gentler piece that seems like mere fluff when compared to the overwhelming energy and abundant creativity so readily apparent on pieces like "Pasar Klewer," "Lir Illir" and "Tjampuhan." Wingfield's distinctive guitar replaces Savoldelli's equally distinctive vocal on the closer, an instrumental version of Wyatt's "Forest."

Pesar Klewer is a complete overview of Dharmawan's stunningly broad stylistic span. High points are numerous, and seem to come almost effortlessly. This fact is doubly amazing when one considers that the pianist had met some of his bandmates for the first time only days before the recording was made. Unfortunately, the 2-CD set ends with 3 of the four least interesting tracks in close proximity, with only Sirkis' lithe and nervously energetic "Life Itself" providing respite.