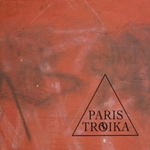 Popular music and jazz have always been connected but, over the years, a bit of a divide has developed. A large portion of songs lumped under the Great American Songbook heading were the popular music of their day. As folk and rock began to eclipse jazz in the public eye, some people refused to get on board while others happily tried these tunes with mixed results, and critical responses ranging from praise to scorn. Paul Desmond tried on Simon and Garfunkel's songs, Wes Montgomery worked through some of The Beatles' material, and rock has continued to provide some suitable—and not-so-suitable—source material as the years have passed. While the Lennon/McCartney songbook still gets its fair share of jazz workouts, many of today's jazz musicians look toward current artists like Björk and Radiohead when looking for creative modern material from another arena. Paris Troika has decided to use rock and popular music for its debut record, but rather than use current favorites the trio has chosen classic rock radio staples.

Pianist Misha Piatigorsky is the lead voice, and the name of the group—alluding to Gorbachev's political and economic reforms in the late '80s known as Perestroika—was likely chosen by the Russian-born, New York-based pianist. Piatigorsky, along with electric bassist Buster Hemphill and drummer Chris Wabich, covers everybody from Queen to Doors Wide Open to Jimi Hendrix. In addition to piano, Piatigorsky uses clavinet and organ to help fill out the sound and expand the tonal palette of the band.

While Piatigorsky sneaks in one of his originals—"Three Tears At Midnight"—everything else is pure radio fare. The trio takes The Police's "Message In A Bottle," reworking Andy Summers' original guitar lick in seven. This riff serves as a vamp for Wabich's solo, and the music takes on a different character when it shifts to a delicious, Cuban-leaning section. Queen's "We Are The Champions (No Rematch)" begins with a distinguished piano introduction, creating a recital-like atmosphere, and shifts to a dirty, warbling urban funk when "We Will Rock You" comes into play.

While those two songs have always worked in tandem, some other less likely songs are matched up here. The Beatles' "Eleanor Rigby" and "Hey Joe," the latter written by Billy Roberts but made famous by Hendrix, are worked into a single arrangement, with "Hey Joe" shifting between Piatigorsky's rubato melodic discourse and more propulsive energy from the rest of the band. While these transitions provide some fun musical moments, it only gets better when the trio starts to rock out. Led Zeppelin's "Black Dog" and The Beatles' "Helter Skelter" also meet up in a single piece, while a quick quote from Deep Purple's "Smoke On The Water" is heard on Hendrix's "Purple Haze."

If Paris Troika aims to show that jazz and classic rock don't have to be strange bedfellows, then mission accomplished.