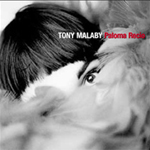 One of New York City's most in-demand tenor saxophonists, Tony Malaby has become one of the most distinctive artists of his time. A first generation Mexican-American born in Tucson, Arizona, Paloma Recio finds Malaby delving deeper into his own personal history, abstracting Spanish-tinged melodies with the support of some of the best improvisers working today.

Focusing on Malaby's penchant for unbound lyricism, Paloma Recio (Loud Dove) is the self-titled debut of Malaby's quartet of the same name. Inspired by the same unfettered passion that spurned John Coltrane and Albert Ayler to lofty heights, Malaby's ensemble embarks on a journey that veers from euphonious ethereality ("Lucedes") to roiling turmoil ("Loud Dove").

A singular stylist, Malaby brings a wide range of expression to the tenor saxophone tradition. A vociferous soloist with a keen ear for structural dynamics, he tempers his explosive angularity with virtuosic embouchure control, pushing beyond conventional tonality with a subtly expansive harmonic palette. His ghostly cries and scorching glisses on "Alechinsky" offer a focused meditation on post-Ayler technique, while his lyrical refrains on "Sonoita" showcase his abilities in a mellifluous light.

Guitarist Ben Monder is the perfect foil for Malaby; his understated phrasing and gauzy distorted tone knits seamlessly with the tenor's breathy exhortations. The rapturously episodic "Loud Dove" reveals a multiplicity of techniques, from delicate kaleidoscopic arpeggios and shimmering atmospheric washes, to searing long tones and string bends that lift the bandstand. Often dovetailing with Malaby, their ornate cadences soar into oblivion with dramatic results; their intertwining discourse on "Boludos" is one of the most eloquent free meditations in recent memory.

Despite the emphasis on thematic development, the quartet does not lack rhythmic acuity; quite the opposite. Malaby's elastic compositions are woven from an impressionistic mosaic of melodic kernels, unfixed tempos and modulating rhythms. Left in the capable hands of bassist Eivind Opsvik and drummer Nasheet Waits, "Obambo" demonstrates their congenial rapport from the start, opening the album with a fluidly deconstructed variation on a lilting Afro-pop groove. Blending harmonious invention with colorful rhythmic accents, Opsvik and Waits bring Malaby's melodious sketches to life with empathetic interplay and dynamic versatility.

Paloma Recio is another stellar recording in the growing discography of one of today's preeminent tenor saxophonists. A vibrant exploration of the open-ended nature of melody, harmony and rhythm, Malaby's Paloma Recio quartet has delivered one of the most luxuriant and bracing albums of 2009.