Peter Brendler: Outside The Line 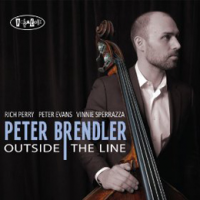 Thirteen years after graduating from Berklee and over a decade into his career as a professional bassist, Peter Brendler has taken the plunge and released his first album as leader, Outside The Line. Look before you leap, as they say. Wise advice, if the quality of this debut is anything to go by.

Brendler has already shown himself to be a bassist with a wide stylistic and dynamic range—powerful and hard-driving on Jon Irabagon's wild and wacky Foxy (Hot Cup Records, 2010), in company with veteran drummer Barry Altschul; gentle and mellow alongside guitarist John Abercrombie on The Angle Below (Steeplechase Records, 2013). His playing on Outside The Line provides further evidence for his adaptability. His sound is characteristically bouncy and fat, but capable of subtle changes, twists and turns—drummer Vinnie Sperrazza's lighter touch contrasts well with Brendler's tone.

Three disparate cover versions adorn Outside The Line. The band kicks things off with a punchy take on Chet Baker's "Freeway," Peter Evans' muted trumpet flying over Brendler and Sperrazza's driving rhythm. Ornette Coleman's "Una Muy Bonita" is altogether gentler than the composer's version from Change Of The Century (Atlantic, 1959)—thanks especially to Rich Perry's tenor sax. Perry starts out by sharing bass duties with Brendler on Lou Reed's "Walk On The Wild Side," helping out with Herbie Flowers' iconic lines while Evans takes on the melody, then takes off with a solo of his own. Sperrazza shares credit with Brendler for building the song's laid-back groove.

Brendler's own compositions cover stylistic ground from bebop to free jazz to pre-bop romance. "The Golden Ring" shares something of the rhythmic slinkiness of "Walk On The Wild Side"; "Blanket Statement" mixes Coleman-ish sections with hints of Latin grooves; "Openhanded" moves more completely into free territory. "Drop The Mittens" mixes things up—a rock-solid rhythm underpins Evans and Perry's extended solos, Brendler's own fluid solo stands alone. "The Darkness" could have come straight from a '40s crime caper soundtrack—bass, drums, tenor and trumpet all hinting at the heist or the hit to come. "Blackout Reunion" also harks back to the '40s, a soundtrack to a film noir affair—but before things get too down, "Pharmacology" kicks in and feet are a-tappin.'

Exactly what line Brendler and his chums are outside isn't totally clear. A quote from legendary American Football coach Bill Parcells adorns the album sleeve—about men with odd-shaped balls—and may suggest a sporting metaphor, who knows. What's clear is that Outside The Line confirms Brendler's reputation as a commanding bassist. It also establishes his credentials as a band leader—hopefully this is a quartet with staying power—and as a composer with a sense of stylistic adventure and an ear for a decent tune. The world really can't get enough of those.