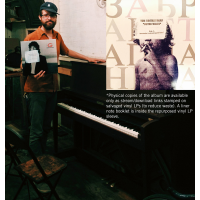 Deliberately low-fi and available as a download only (though you will be sent a repurposed album cover with a download code Scotch-taped to it if you request one), Outro Waltz by the Tom Csatari Band is, depending on your mood or musical orientation, completely charming or somewhat annoying. The download, ironically, is divided into two sides: one recorded direct to two-track in a studio, the other side recorded live in a small club. After a few listens, both Csatari's music and proletarian approach had won me over. Admittedly, many of us are spoiled by studio gloss and nearly perfect tracks comprised, Frankenstein-like, of carefully sequenced multiple takes. But if you're tired of that sort of thing, crave the immediacy of a truly live recording, and don't mind an oddball goulash of musical styles, Outro Waltz will be a real breath of fresh air, though you absolutely have to dig the sound of the synth-guitar to really get into this album.

Heavy on the strings (two guitars and a violin throughout) and clarinet, with RJ Miller's light touch on the drums, Csatari's music has a decidedly warm, folksy sound. This is leavened with a pronounced element of old school free jazz and dada-istic improvisation. Oddly, some of Csatari's appealing and rather complex compositions (e.g., the through-composed "El Morrisony") sound a bit like weird European progressive rock from the 70s; Rock-In-Opposition bands such as Henry Cow come to mind. Strains of Klezmer and Middle Eastern music inform many of the tracks, most notably "Uncivilized," the album's 11-plus minute-long magnum opus that slowly devolves into an old-school droney group improvisation replete with chanting, odd vocal effects (including what sounds like a coughing attack), waves of synth guitar, free-range bass clarinet musings, and random small percussion. Krautrock, anyone?

For all the experimental, off-the-cuff things going on here, there are an equal number of delicate and pretty moments. "Blues for Robbie" is like a slice of musical marble rye: swirls of country blues, progressive rock, modern jazz, and electronic drones combine to form something undeniably tasty. "Wharfs and Drifts" does something similar after a rather lengthy opening improv section. "Legion," "Sisters," "The Winning Blues," and the band's cover of Elliot Smith's "Speed Trials" all have a sincerely warm, inviting, and somewhat Bill Frisell-like rustic wistfulness. Throughout, Adriel Williams's sweet-toned violin shines. The dual guitars, played by Csatari and Cam Kapoor, don't overplay. Instead, they maintain a delicate sort of counterpoint, imparting an airy quality to the music.

Covers of tunes by Lee Morgan and Thelonious Monk are addressed in an non-standard fashion. "Search for a New Land" gets a refreshing and mildly phantasmagoric electric makeover (R. J. Miller's drumming is particularly effective here). On the other hand, the band (Miller and saxophonist Levon Henry excepted) sounds a little clueless on their stilted version of "Light Blue." Sadly, several of the live tracks, notably "Search for a New Land," "Speed Trials," and "Water Park Rodeo" (one of Csatari's more effective compositions) are marred by an individual talking loudly in the background. Some of the quieter free improvisational passages would also have benefitted if Csatari had opted for less audio vérité.

All told, Outro Waltz succeeds more often than it stumbles. Though it's a righteous thing to play and record music in one take and in real time, the recording environment is less than ideal, and a lot of non-musical distractions are also captured in the process. It's a live recording in a small space in front of an audience that wasn't hip enough to stop talking during the take. Inevitably, one must wonder what the result would have been like if Csatari and his band had recorded this in a studio, or at least in a room where people had the decency to keep their mouths shut.