Empirical: Out 'n' In 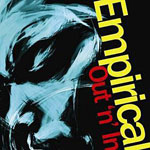 Empirical's eponymous debut album, a stew of mutated bop produced by saxophonist Courtney Pine for his own Destin-E label, created a bushfire of enthusiasm in the UK. That was in 2007, and since then the group has made international strides too, appearing at the Newport Jazz Festival, the New York Jazz Festival, the North Sea Jazz Festival and at the Vancouver, Victoria, Toronto and Montreal jazz festivals. The band hasn't headlined yet, but on the evidence of Out 'n' In, that can only be a matter of time. This follow-up is an even bigger blast than Empirical.

Out 'n' In is dedicated to Eric Dolphy. It includes two Dolphy tunes, "Hat & Beard" and "Gazzelloni," both from the alto saxophonist and bass clarinetist's landmark album, Out To Lunch (Blue Note, 1964), and here revisited with 100% conviction. They're joined by six group originals cut from the same template, and three brief, Dolphy-esque, free improv interludes. The joints are seamless, on a disc which twists and turns and takes off at unexpected angles in recognizable, but not slavish, Dolphy style.

The album was produced by up and coming saxophonist Jason Yarde, and features a line-up which has changed substantially since the first album. Alto saxophonist Nathaniel Facey and drummer Shaney Forbes are the only holdovers from Empirical's core quintet, and are joined by vibraphonist Lewis Wright and bassist Tom Farmer. Lewis' presence lends itself well to the material, of course, his glowing lines a reminder Bobby Hutcherson's contributions to Out To Lunch. Fitting right in too is the immaculate, Byronic playing of guest artist Julian Siegel, heard on tenor saxophone and bass clarinet.

Farmer's charging "Out But In," inspired by Dolphy's "Mrs Parker Of KC," is a triple shout-out: to the blues, to Dolphy and, via his mother, to bop saxophone giant Charlie Parker. It's the most relentlessly intense track and sets the tone for much of what follows. Two more introspective tunes, Facey's "A Bitter End For A Tender Giant" and Farmer's "Bowden Out," positioned respectively halfway through and at the end of the disc, show how effectively the band still cook at lower temperatures. "Tender Giant" is a love cry to Dolphy and a lament for the manner of his passing (while touring in Europe, Dolphy collapsed into a diabetic coma, but was left untreated in hospital on the assumption that, as a black American jazz musician, he had overdosed on drugs). "Bowden Out" carries less baggage, taking the set out on a restful, prettily tuneful note.

Out 'n' In is a great album, and Empirical's rebooted lineup is one to look out for.

Out But In; Hat & Beard; A Conversation; So He Left; A Bitter End For A Tender Giant; Dolphyus Morphyus; Interlude; Gazzelloni; Syndicalism; Another Conversation; Bowden Out.