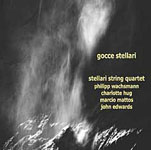 Over the years, Emanem has nobly championed the cause of improvising string players. Back in 2001, the label released the groundbreaking triple CD Strings with Evan Parker on which the majority of tracks actually featured strings without Parker's sax. Before that came Kent Carter's string trio of bass, violin and viola. More recently, Emanem has released Arc, the trio of violin, cello and double-bass, and Trio of Uncertainty, consisting of Veryan Weston's piano plus cello and violin.

So it comes as no surprise that the label has now released this CD by Stellari String Quartet, comprising Philipp Wachsmann on violin, Charlotte Hug on viola, Marcio Mattos on cello and John Edwards on double-bass. Besides that line-up being a roll call of top-notch string improvisers, it is noteworthy for breaking away from the conventional (i.e. classical) string quartet line-up of two violins, viola and cello. Substituting the double-bass for one of the violins extends the spectrum of sounds this quartet can produce, adding more bottom and giving the music greater depth and solidity. Although the phrase "string quartet" carries connotations and raises certain cultural expectations, here it simply signifies a foursome of string players, nothing more.

Refreshingly, the music here seeks to neither emulate nor deliberately avoid conventional notions of the string quartet. Instead, each of the four players brings their own distinctive voice and approach to their instrument plus openness to the music produced by the others. Across four tracks recorded live in concert in Switzerland in May 2007 and three studio tracks recorded in London the previous September, the four voices interact and immerse themselves in the collective identity of the quartet.

Telltale trademark traces of the individuals remain evident— Wachsmann's soaring glissandi, Hug's simultaneous bowing of all four viola strings, the gravitas of Mattos's stately bowing, Edwards' percussive blows to the body of his bass—yet the individual voices are more often subsumed into a dialogue in which their contributions overlap both in time and in frequency, creating a whole greater than any of its parts. It is a fascinating exercise to try to remain focused on one player throughout, but ultimately that is as difficult as following one particular strand through a richly woven tapestry.