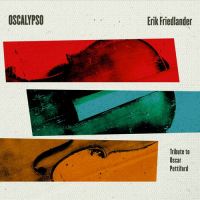 As a veteran of the fertile 1990s Downtown NYC scene, cellist Erik Friedlander has been involved in myriad creative endeavors, including innovative sideman work with Dave Douglas and John Zorn, while leading his own unique ensembles, such as Chimera and Topaz. More recently, Friedlander has been performing solo and developing projects inspired by rural Americana, but he has never released an album of covers—until now.

Oscalypso features creative reinterpretations of nine of Oscar Pettiford's most beloved tunes. Although Friedlander hasn't actually recorded Pettiford's compositions before, this effort can be heard as an extension of Broken Arm Trio (Skipstone, 2008), Friedlander's original tribute to the renowned contrabassist's groundbreaking cello experiments, which Pettiford first embarked upon in 1949 while recuperating from a broken arm.

The engaging program encapsulates an array of styles and moods culled from Pettiford's songbook, ranging from the plucky "Cello Again" and jaunty "Cable Car" to the languid "Two Little Pearls." Venturing into exotic territory, the flamenco-infused "Tamalpais Love Song" and the tango-based "Sunrise Sunset" recall Friedlander's evocative work with Zorn, more so than Pettiford's customary bebop.

Brimming with gorgeous melodies, lush harmonies and captivating rhythms, Friedlander's beguiling arrangements provide a rich foundation for the group to test its improvisational mettle. Focusing on reconfigured classics rather than new compositions, Oscalypso is more than just a delightful homage to a renowned master—it is a signifier of Friedlander's skills as an imaginative interpreter of traditional jazz repertoire.