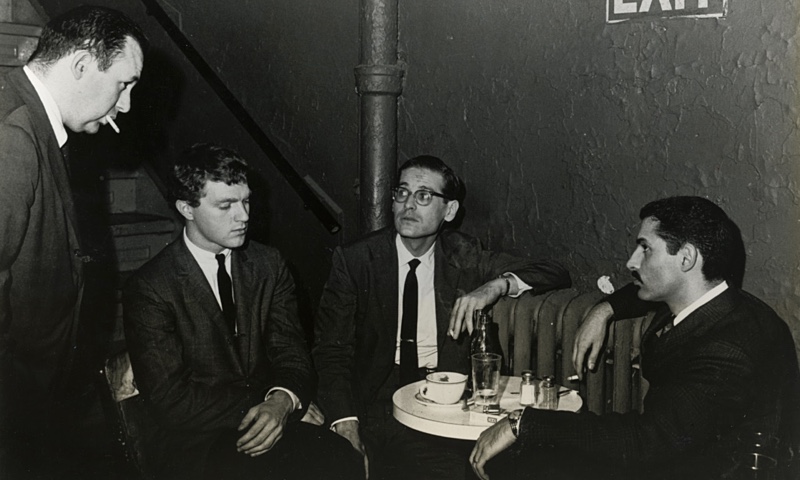 Neither I nor anybody in the world discovered Thelonious. You don't discover a force of nature. It's there. —Orrin Keepnews

This interview was originally published in August 2007.

As a city boy who took a liking to jazz music and extended it into a budding career as a journalist, Orrin Keepnews may have inadvertently veered into the record-producing arena that generated classic albums from a wide range of unforgettable artists. Maybe it was a fortunate accident. Maybe fate.

Maybe it's a word he uses about others: inevitable.

Born in New York City eighty-four years ago in 1923, Keepnews has lived a remarkable life in jazz during its golden years and amid most of its greatest innovators and interpreters. He can look back on album-upon-album with the likes of Thelonious Monk, Bill Evans, Sonny Rollins, Cannonball Adderley, Wes Montgomery, McCoy Tyner and so many more. As he bounced from the Big Apple to San Francisco over the decades, this city lad could count these valued people in music as colleagues and friends. Today, he could rest on his laurels.

But he doesn't. He's almost a country gentleman these days, away from San Francisco, a place that was home for decades, but still working, producing albums and heavily involved in the reissue game that this year resulted in the superb The Keepnews Collection. It's all in a day's work for the producer who seems unaffected by renewed interest in his life that has been spurred by The Collection. He's proud of his accomplishments, but lives in today and has an eye on tomorrow. Country gentleman? OK, maybe not quite.

"Actually, I'm still in the San Francisco area, says the affable and esteemed music executive. "We just, a few months ago, moved out of the city into an East Bay suburb, El Cerrito, which is just past Berkley. If you live in California, you might as well get a little ground under your feet once in a while. I came out here from New York over thirty years ago and have lived completely between New York and San Francisco—almost completely a city boy all my life. So it's nice for a change. I have an honest-to-god back yard. We have a lemon tree flourishing in it. Things like that.

In the meantime, he's doing what he has done for decades: listening to jazz, investigating new artists and projects worthy of producing, and keeping busy with reissuing classic sessions.

For reissues, 2007 is a big year for Keepnews. The Keepnews Collection from the Concord Music Group is a series of albums he did in the 1950s, 1960s and 1970s and originally released either on his Riverside Records or Milestone Records. All titles are remastered in 24-bit from the original master tapes and allowed the producer to revisit some of his accomplishments. They're released in batches of five records; two batches out and more to come.

"As I said when the idea was originally thrown at me, you certainly can't insult me by making me the focal point of it that way, says Keepnews, "and it does give me the freedom to do an eclectic mix. Some of these are some of the obvious high points of my career and others are things I have a great affection for and in a number of cases they should have gotten more attention. So it's a nice combination.

Each CD also contains updated notes, remembrances of the artist and events that place a further value on the disks. Keepnews' writing is of value because of the "I was there historical factor, but also the style in which it's presented. It's plaintive and to the point, as well as colorful and honest. Contrast his forthright description about has disdain for Chet Baker, even while producing a fine album, with his fondness for the Adderley brothers. Both descriptions, like the others in the collection, are unabashed. It's interesting to read Keepnews' recollections as he looks back.

One could go on and on about the music. The Adderley group live and blowing freely. Henderson with young firebrands Herbie Hancock, Ron Carter and Jack DeJohnette. Wes with Wynton Kelly, Paul Chambers, Jimmy Cobb and Johnny Griffin, swinging like mad. Health's all-star band and Blakey with a horn section of Wayne Shorter, Freddie Hubbard and Curtis Fuller. Wailing. It's part of Keepnews' legacy, one that's still building. The collection gives a microcosmic view of why Keepnews has been honored by the National Academy of Recording Arts and Sciences with a Governors Award for Outstanding Achievement and by the Jazz Journalists Association with its A Team award for contributions to the art form.

Keepnews isn't just digging into vaults for something to do. He is still producing new things when the right opportunity arises. But he admits things have changed in the recording business. He says there is an instability at present, that may one day correct itself. But until such time, producers and artists are dealing with an industry in flux.

"The reissue projects have been keeping me busy. The timing is nice, says Keepnews. "I'm glad to be able to devote the amount of care and digging into the existing tapes and such. When Fantasy sold itself to Concord, it opened a renewed burst of reissue activity with my own material for me. Actually, I'm delighted to have the regularity of the reissue package, even though there are projects and people I'm interested in. It's a real weird time, as far as new jazz production is concerned. As a matter of fact even as far as the reissue world in general. It's a very unstable time. So it is kind of nice to have an ongoing series like this.

Looking back over decades of outstanding work, Keepnews has a unique perspective. He's quick with his comments, no doubt enforced by the fact that he knows what he's talking about and has been through it all. Even so, the pride in his achievements is mixed with some modesty and an unfailing sense that, in many of life's achievements, there is a degree of serendipity involved. Still, there aren't that many people out there with Keepnews' experience. His matter-of-fact manner of discussing music, including the current scene, is informative and worthy of note.

"I consider the record business unstable when there isn't any Tower Records to go look at your product. To an almost a complete extent, the majors [record labels] are not messing with jazz at all, he says of the state of recording today. As for the Internet and how some artists are turning to it exclusively, "I think it is an overreaction. We're some place in the middle of an exaggerated pendulum swing here. I do think if we're all able to survive, we'll get a more normal relationship between the owners of the masters and the producers and re-producers of it, and the public. We'll get back in synch, but I certainly don't think we're in synch right now.

"The majors are always hard to predict simply because their attitudes, first of all, are always rather severely affected by corporate considerations—profit and loss sheets, which jazz rarely looks good on. I've been in this business an incredibly long time and I look back and I see that given enough time, the majors will completely reverse their position on specialty product—jazz or classical or what have you. But by the same token you have to start looking at it a little differently because we don't have 'majors' to the same extent and the same quantity we used to have in the record business.

Then there's the plethora of recordings and ease of cranking out independent CDs. "Theoretically, we have technically gotten to the point where anybody's bathroom is a recording studio, the affable producer says, and not particularly tongue-in-cheek. He adds with a grin, "And you can quote me.

With many artists recording in their own studios, Keepnews feels results can be good, but not always up to par. "Sometimes they know what they're doing and sometimes they don't. The problem is, when technology goes marching ahead, they don't always hand out free lessons to the right people. The technology may be in wonderful shape, but it's not necessarily being optimally operated, which makes technological advances risky things, at times.

When Keepnews got into the business, technology certainly wasn't what it is now. He was never a technician anyway, relying more on his intuitive feel for the music and his feelings about how the musicians he met and heard mixed in with what was going on. Who was important? Who would go on to be important? What impressive sounds were out there and how can they get to the public? Those were more important than technical issues.

He was born 1923 in the Bronx and admits there was no musical background in his family from which to draw. He listened on the radio to pop music of the day, which was swing music of the big bands. And he wasn't afraid of the night life.

"I am fond of pointing to the fact that when I was in high school and first in college, I was in New York, there was a hell of a lot of music going on. Nobody was being carded because we hadn't come to that stage in life yet. Before there was a draft, before the approach of World War II, nobody was carrying universal identification. The legal drinking age in New York was eighteen, but long before I was eighteen, I was able to stand at a bar and put down my 75 cents or a dollar and get a drink. The odds are that there was some pretty interesting music going on in that environment. That very much was the beginning of it for me.

Keepnews went to Columbia University. "I was one of those amorphous things called an English major. I thought that I was going to grow up to be a writer of some kind, an editor or a newspaperman or a creative writer, he says. He graduated with a degree in English, but World War II was on and he entered the military. Upon his return, already a jazz fan, he "fell in with a crowd that was very jazz oriented. I did a lot of listening. Then I had this nice accident where one of the people I was hanging out with took over the ownership of a jazz magazine (Bill Grauer's Record Changer magazine). At that point, I was working as a young editor at a book publisher in New York, at Simon & Schuster. I guess one way to describe me is the only professional literary person that Bill Grauer knew. So he asked me to help edit the magazine he had just taken over.