BY DAN BILAWSKY
November 15, 2010
Sign in to view read count 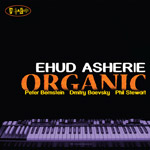 Contrary to what some might believe, the designation of a musician as an organist or pianist does not have to be mutually exclusive. While some players choose to focus all of their time and energy on one of these instruments, many others prefer to branch out and try their hand at both. Fats Waller wasn't afraid to work in both worlds, and a whole list of modern-day players, including Gary Versace, Larry Goldings and Sam Yahel, are adept on both instruments.

Ehud Asherie can now be added to that list. His string of piano-led discs on the Posi-Tone Records label have already positioned him as a rising jazz star on that instrument, but Organic is all about the organ, and he pushes the piano aside for this one.

The program is evenly split between Asherie originals and covers, ranging from Leonard Bernstein's "Tonight" to Antonio Carlos Jobim's lesser-known "Favela," and guitarist Peter Bernstein is superb across the entire album. His clean-toned, single note lines are always a treat and his soloing on the charming ballad "Coquette" is an album highlight.

Asherie's organ playing is unpretentious and pleasing, never running into modern-day abstractions or resorting to clichés. The momentary stops on the second syllable of "Tonight" add a hint of mischief to an otherwise fairly straightforward performance, and the aforementioned "Coquette" adds a touch of grace to the album. "The Stopper"—a sorely neglected Sonny Rollins tune—features lots of stop-time punctuations and unison hits beneath Dmitry Baevsky's alto saxophone proclamations. Baevsky's searing solo work energizes the rest of the band and drummer Phil Stewart delivers an explosive solo. Jobim's "Favela" is taken a bit faster than usual, with a samba-like groove on the bottom, and Asherie kicks things off with a Morse code-like lick. Stewart's solo, with some festive tom-dominated playing over his steady samba footwork, is the highlight here.

Asherie's originals include a mellow jazz waltz ("Valse Pra Jelena") with Bernstein showing some Grant Green-like tendencies delivered in a more modern fashion and a tribute to Fats Waller ("Blues for Fats") that clearly owes a debt to the man himself. Asherie isn't likely to give up the piano on a permanent basis, but the aptly titled Organic's presents an alternate view of the keyboardist's work, and is a welcome addition to his already impressive catalog.