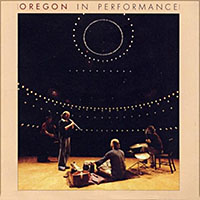 Sometimes it's a great experience to hear a live recording where you were actually at the show and can recall some of its most exhilarating moments. In the case of today's Rediscovery, Oregon's In Performance, I was at only one of the dates from which this original double-LP (reissued on a single CD by Wounded Bird in 2003) was culled—Montreal, which was recorded along with shows in Quebec City and New York City. Still, the free improv that opens the album (and opened the show), "Buzzbox," was one of the pieces from that Montreal show, and remains so memorable- -representing the group's ability to truly compose spontaneously, in the moment, pulling real form from the ether—that I still get shivers up and down my back when I hear it.

In Performance was Oregon's third and final recording for Elektra, a signing that represented a major step up in production values for the group that was playing world music long before the term existed. Every one of the group's earlier Vanguard records were superb, but when guitarist/pianist Ralph Towner, reed and woodwind multi-instrumentalist Paul McCandless, double bassist and occasional pianist/violinist Glen Moore and tablaist/percussionist/sitarist Collin Walcott—who died in a tragic car accident five years later, while the group was on tour in Europe—released its first Elektra record, 1978's Out of the Woods, it was clear that a sonic leap had been made—the recording clearer, more delineated and more present than the Vanguard dates.

In Performance's nine-song, 74-minute set is culled from earlier recordings like the group's 1973 Vanguard release, Winter Light (Moore's oblique, quirky and open-ended "Deer Path") and, from the group's nascent days as part of the Paul Winter Consort (Towner's near-iconic' anthemic "Icarus"). There's new music from McCandless (the powerful, lyrical "Wanderlust") and songs first heard on Towner's Sound and Shadows (ECM, 1977) with his Solstice group ("Along the Way" and an especially striking and extended "Arion") along with "Waterwheel," the opening 11/8 track to his impressive trio date Batik (ECM, 1978). But it's the two free improvs—"Buzzbox," named for Walcott's buzzing percussion instrument and Towner's placing of a tambourine on the strings of his piano, and the more appropriately named "Free Piece" that opened side four, that demonstrate how simpatico these four outstanding musicians were...night after night.

At that time, in fact, the egalitarian group created its set lists in a democratic fashion, passing the responsibility around the members one set at a time, from gig to gig. There were some ground rules: the set always opened with a free improv, and included songs featuring Towner's piano, classical and 12-string guitars and Walcott's sitar and tablas. It kept things fresh, because a song the group hadn't played in a long time could be called. I remember being at a sound check a couple years later, where someone called Winter Light's "Rainmaker"—a particularly challenging song that the group ultimately managed to put together and perform that night, but not after considerable rehearsal and discussion since there was no sheet music. But how the set moved from its opening improv into the compositions was also completely spontaneous, as was how the rest of the set unfolded.

After In Performance, Oregon moved to ECM for three records, to Portrait for one, and Intuition for another six—not including the hard to find self- released soundtrack to a theater performance of Shakespeare's A Midsummer Night's a Dream (1998)—before settling in with Italy's Cam Jazz in 2005 for Prime and a relationship that continues to this day, with its most recent release, Family Tree (2012).

As Oregon approaches its 45th anniversary in 2015, hopefully there will be something to celebrate this remarkable milestone for a group that, other than having to replacing Walcott—first with Trilok Gurtu and Arto Tuncboyaciyan before settling on Mark Walker on 1997's Northwest Passage (Intuition)—has retained an identical lineup for its entire career. Until then, In Performance—its final all-acoustic recording before Towner began bringing synthesizers into the mix with Oregon (ECM, 1983)—is a reminder of just how innovative and groundbreaking this quartet was, each and every night, on one of the indisputable highlights of a discography that's now 28 strong.