BY DOUG COLLETTE
December 28, 2014
Sign in to view read count 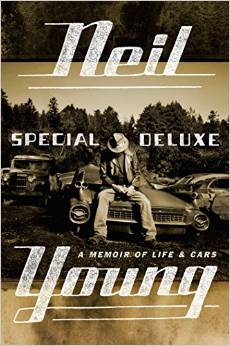 It's hard to believe Special Deluxe is written by the same man who wrote Waging Heavy Peace (Blue Rider Press, 2012). Neil Young sounded so selectively obsessive on that glibly titled and not so well-edited autobiography, his focused and conversational writing here, from the very preface on, is the proverbial breath of fresh air so much so it may well renew your faith in him as a creative artist as well as a concerned citizen of the earth .

Transparent as are Young's expressions on environmentalism as peppered throughout the book in the form of carbon dioxideusage by various automobiles he describes and in the section where he makes a turn away from using fuel inefficient vehicles in a concession to larger environmental issues, those somewhat stilted intervals are overshadowed by the appropriately childlike wonder he radiates describing his early days in Canada, his rites of passage as a fledgling musician turning pro and, as the main conceit of the book, his fascination with automobiles. The overriding topic of A Memoir of Life and Cars thus becomes an avenue of insight into Young for both the reader and the author,

In contrast to the forced friendliness he worked at in his preceding book, the informality of tone the Canadian maintains in this one is utterly charming. Even with his pursuit of issues close to his heart, such as the tar sands project in his native country or his development of his electric auto Lincvolt, he remains pragmatic enough to preclude the self-righteousness that often undermined his devotion to such concerns as his Pono audio project. And because he so effectively maintains the primary conceit of Special Deluxe—his life's milestones marked by his self-admittedly obsession purchase and maintenance of automobiles(and secondarily his love for dogs!-there's a palpable sense of Neil Young's own evolution as it arises out of these passions as well as his abiding loyalty to the creative process that gives birth to his music.

These three-hundred seventy plus pages are peppered with what have to be called asides to the man's songwriting, recording and performing career precisely because, even when extensive excerpts of lyrics are included, such as that of "After the Gold Rush," the insertion reinforces the unfolding of the tale at hand and illustrates how this form of writing, secondary as it is to that for his main artistic endeavors, supplies a necessary and largely healthy diversion. As evidently does Young's abiding interest in painting: as with the artwork to his album Storytone (Reprise, 2014 ) stylish depictions of the various and sundry automobiles Young talked about appear throughout, the only overt credit certainly a humble on one splash page: "Illustrated by the author."

He certainly deserves that credit as the artwork supplies continuity to the book and maintains its integrity to boot. Yet what might be most laudable about Special Deluxe is that, even as it tells a multifaceted tale with as much clarity as personality, it leaves Neil Young open avenues to explore any one or more of the various aspects of his life should he choose to do so. In that way, his new-found career as an author compares to his work as a musician, at least in the sense that no one title can ever be termed definitive; rather the story he's telling, of greater or lesser significance with greater or lesser style, is worth hearing within the wider context of all his work.