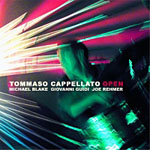 The demise of modern jazz has been greatly exaggerated. Countless musicians around the globe are contributing new chapters to the wonderfully complex idiom of composition and improvisation. One such example can be found in Open, the debut from drummer Tommaso Cappellato. His experience stretches from taking lessons with local drummers in Italy at 16; enrolling in the Drummers Collective in New York in 1996; studying with notables like Billy Hart, Jorge Rossy and Reggie Workman; and involvement in versatile works with Don Byron, the Vibes Trio ( with vibraphonist Bill Ware and bassist Brad Jones), and the hip hop band Brohemian.

While the music is rooted in earthiness, there's a sense of skirting the edge on tracks such as "World of Traveller." What sound like a reflection on Alice Coltrane's "Blue Nile," with Blake's mesmerizing sax, quickly moves into urgent waters with a deep pocketed groove and piercing individual statements. "Mysteries Of Life" is the inverse—stretching, and toying with a simple theme that is measured and passionate.

Good drummers keep the rhythm but outstanding ones color it. Cappellato is an artisan, whether exploiting a persuasive hip hop beat on the too brief "Scream Away" or providing a melodious song-like solo in "Talk To Me," where he carefully manipulates every inch of his kit. His cymbals sound like tambourines on "The Knight," before the band enters the track's circuitous pattern. A soft touch surfaces in the ballad "Krishnamurti," the recording's most straightforward track, but reverts back to unexpected territory with the unusual drum/bass duo, "He Said Then She Said," then concluding with Cappellato's brilliant piano solo, "Natural Element." A fitting and surprising conclusion to this revealing debut.