Oliver Schwerdt with Barry Guy and Günter ‘Baby’ Sommer: One for My Baby and One More for the Bass 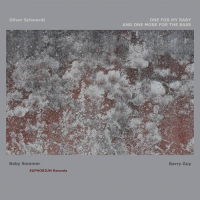 There aren't many musicians who've loomed larger in European free improvisation since the 1970s than bassist Barry Guy and percussionist Günter 'Baby' Sommer. In addition to their own work as leaders (the former having much more of a presence in this regard than the latter, admittedly), each has collaborated with the heavyweights of the free music scene, from Peter Brötzmann to Evan Parker to Cecil Taylor. Yet the two had never performed together, until up-and-coming pianist Oliver Schwerdt invited them for a performance in 2016 by his mid-sized ensemble Euphorium_freakestra, documented on Grande Casino (Euphorium Records, 2018). Now he's convened them for a trio outing, One for My Baby and One More for the Bass. And it's a memorable meeting, to be sure, filled with the frenetic exchanges and wide-ranging creativity one would expect from the two wily veterans, and with the much younger Schwerdt proving himself every bit their equal.

The three musicians share an anything-goes sensibility that is apparent from the outset. Schwerdt is an assertive pianist, capable of everything from the most emphatic eruptions to pensive ruminations, but he's not "leading" here as much as he is by turns presenting, responding and calibrating in conjunction with his colleagues. The result is a remarkably egalitarian recording, collaborative music-making at its finest. Each of the three is prone to steer the music in new directions, and each can serve as a foil to the others when it is called for.

The first of the three pieces, the 24-minute title track, roams freely throughout, a panoply of figures and gestures that avoids stasis through constantly shifting creative modes. Schwerdt's animated vocal utterances are occasionally present, as are an assortment of other "little instruments" that he'll add from time to time. A harmonica here, a toy xylophone there. Although these techniques do lend an undisguised levity to the music, the effect never feels gratuitous. And at times the music is downright stunning: when the three find their collective strength midway through the piece, Schwerdt assaulting the keys over Guy's thunderous arco and Sommer's mad skitterings, the power they generate is immersive and exciting.

"On the Road Again" is somewhat shorter at just over 17 minutes, but it too covers a lot of ground, albeit with a more determinate rhythm at the outset spurring Schwerdt to even more aggressive bursts (offset only slightly by a repeated phrase on what sounds like a wood flute). Sommer's explorative tendencies are evident here, even with a more fixed pulse, and Guy's deep energies add considerable heft to the music. And the last several minutes incorporate some surprisingly restrained musings, with more space in the music and measured conversation between Schwerdt and Guy, before once again finding a more explosive temperament in concluding the track. The closing piece, "The Last Song," doesn't quite reach the crests of creativity of the other two, but at a relatively brief five minutes in length it allows the musicians (and listeners) to catch their breath in a tranquil, meditative reverie especially effective in framing Guy's lyrical agility in the upper register of his instrument.

Curiously, the original release was issued as a double CD, with the three pieces presented as recorded on each, but with two different mixes. One has to listen closely to perceive any significant distinctions between the two. The version mixed and mastered by Robert Amarell has a "bigger," more immediate sound, while the other, with Gilbert Eiche at the helm, is more subtle, with better instrument separation. But either is fine, really, in capturing the collective spirit of these three superlative improvisers, on a terrific album worthy of multiple encounters. If one perceives this meeting as a kind of cross-generational passing of the torch of free improvisation, we can take heart in knowing that Schwerdt is determined to carry it boldly into the future.

One for My Baby and One More for the Bass; On the Road Again (Ausflüge zum Interhotel); The Last Song (Air).

Title: One for My Baby and One More for the Bass | Year Released: 2020 | Record Label: Euphorium Records