Bob James: Once Upon A Time: The Lost 1965 New York Studio Sessions

By Dan McClenaghan
August 19, 2020
Sign in to view read count 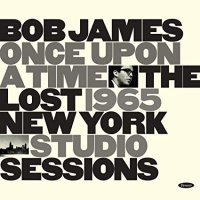 Most people have heard the music of Bob James. He wrote "Angela," the theme song for the popular television comedy Taxi. The show ran from 1978 to 1983, and reruns are ongoing. The Bob James became one of the fathers and most successful purveyors of the smooth/fusion jazz sound, in recordings under his own name, with the group Foreplay and in teamings with saxophonist David Sanborn.

Once Upon A Time: The Lost 1965 New York Studio Sessions takes us to Bob James back in the beginning, in a way we perhaps haven't heard him, before he hit the groove which took him into a lucrative and still vibrant career.

The first impression: the music sounds so un-Bob James-y—no R & B funk moods, no lush and gorgeous backdrops, no high-polish production, no synthesizer sweetenings. Instead, the two sessions are two-thirds straight ahead piano trio jazz—not too far from what pianist Bill Evans was doing at that time—mixed with some unexpectedly far out avant-garde.

The first session, laid down in January '65, opens with Leroy Anderson's "Serenata," first recorded in 1949 by the Boston Pops Orchestra. James' take features the bright, light-stepping melody in front of the bounce and shuffle of bassist Larry Rockwell and drummer Robert Pozar. The disc's title tune, a James original, is painted with darker hues than those of the opener—wistful and sad, with a shift into an anguished segment of angular piano searchings and arco bass that re-convenes into the engaging melody. Joe Zawinul's "Lateef Minor 7th" begins in a mainstream mode, but shifts into clamorous, low-key disarray, with vocalizations which sound as if they issued from unsettled minds, before the tune finds its way back home. "Variation," another James-penned tune, begins in a stately manner that evolves—via the off-kilter instrumental machinations of drummer Posner and bassist Rockwell, along with some more indecipherable vocalizations—into straightforward weirdness, with the piano trying mightily to retain a mainstream mood.

The set, considered in its entirety, seems to say Bob James could have taken a number of different paths in his jazz journey: one on the sunny side of the street as a melodically bright, Ahmad Jamal-style piano trio guy, or taking a wild ride along a zig zagging road to a Stockhausen-esque avant-garde approach, instead of following his muse to wonderful success in the creation and the shaping the fusion/smooth jazz sound.

And, it should be mentioned, the guy who recorded these two sessions was George Klabin, founder and co-president of Resonance Records, who was nineteen years old at the time, and continues to find great music from the past, from Eric Dolphy, Bill Evans, Wes Montgomery, Nat King Cole to Bob James and more.