Johan Lindström Septett: On The Asylum 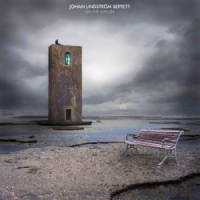 Multi-instrumentalist and composer Johan Lindstrom issued his 2018 septet debut Music For Empty Halls (Moserobie Music) to global accolades. The unique set was nominated for a Swedish Grammy, an award which Lindström had captured on four previous occasions. The debut was noted for its unhurried and democratic approach to creative ensemble music. On the Asylum, the second outing of the Johan Lindström Septett surpasses its predecessor as a stunning and eclectic project.

Lindström is not yet well-known in the U.S.A. but has a long-standing following in his native Sweden and has worked with a broad array of top talents. He played electric, acoustic, and pedal steel guitars on For The Stars (Deutsche Grammophon, 2001) with Anne Sofie Von Otter and Elvis Costello and he has recorded with popular Swedish singer Rebecka Törnqvist. Lindström was a prominent contributor to E.S.T. Symphony (ACT Music, 2016), a tribute to the music of Esbjorn Svensson with original drummer Magnus Ostrom and bassist Dan Berglund. Berglund is also a co-leader of Lindström's Tonbruket group. On the Asylum reunites the core ensemble from the debut album.

Consisting of fourteen vignettes, the album opens with an atypical "What What" featuring Costello on a mostly spoken-word vocal. "Twenty Twenty" acts as a bridge to the mood-setting "Homeward," a pastoral piece featuring elegant reed work from Jonas Kullhammar and Per Texas Johansson. Lindström's pedal steel guitar adds a different and appealing flavor to the number. "Trombone Interlude" is just that; Mats Äleklint's very brief link to the noirish and majestic "The Prom." A pattern develops as Jesper Nordenström's piano creates a break on "Solitude Tune" then segues into Lindström's acoustic guitar-driven "Echoes Across the Dunes."

Lindström craftily weaves discord into the otherwise bucolic On the Asylum, many of the pieces transitioning without a break, creating a suite-like feeling. There is the gentle swing of "Edwards Chacone," Margareta Bengtson's celestial harp on "Music Orbit Box," and the stately orchestration of "Humming Ships," featuring one of two vocal appearances by Sofie Livebrandt. The collection closes with "Worms of the Underground," an exotic four-track pedal steel guitar concoction. On the Asylum is one of those rare albums which appeals at every point, beginning to end, and on repeated listening. Highly recommended.

What What; Twenty Twenty; Homeward; Trombone Interlude; The Prom; Solitude Tune; Echoes Across the Dunes; Edwards Chacone; Music Orbit Box; Humming Ships; On the Asylum; Septet Serenade; A Snippet From "Music for Valves and Pedals; Worms of Underground.