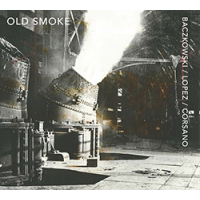 The image on the cover says it all, a blast furnace exploding with elemental energy and heat. And it doesn't take long for the music on Old Smoke, a live release that represents the first recorded collaboration between saxophonist Steve Baczkowski, bassist Brandon Lopez and drummer Chris Corsano, to reach astonishing peaks of fiery intensity. This is a trio not to be trifled with, on a single-minded pursuit of powerful free improvisation in its most uncompromising form.

Of the three musicians, Corsano is the unquestioned veteran, having released dozens of albums just since 2010, although his recording career began in earnest in the 1990s with frequent collaborations with saxophonist Paul Flaherty. He represents a bridge of sorts between the free jazz tradition and avant-garde and experimental rock, being just as comfortable working with Thurston Moore or Bill Orcutt as he is playing alongside Joe McPhee or Evan Parker. His partners on this release are quickly establishing their own reputations; Lopez has teamed with musicians such as Ivo Perelman, Dave Rempis and Peter Evans, while Baczkowski is a Buffalo-based multi-instrumentalist whose specialty is the baritone sax and whose previous work with Corsano has often included the like-minded iconoclastic guitarist Bill Nace.

As for the music here: it's definitely not for the faint-hearted. With seemingly limitless stamina, Baczkowski is intent on extracting every available ounce of energy from each note he plays, and on tracks like "Steel Wind" and "Smoke Creek" he pushes his torrid phrases to the brink with manic abandon. He will take a fragment of an idea, or even a single note, and attack it repeatedly, eventually breaking it down to its core before seizing on another one and doing the same all over again. Sometimes he takes a drone-like approach, as on "Blast Furnace," where he merges with Lopez's swelling arco and Corsano's steady pulse to create a hypnotic wall of sound. He uses a number of saxophones on the album, with his pile-driving baritone on "Iron Ore" and "Blast Furnace," his keening soprano on "Open Hearth," and what sounds to be his formidable tenor on "Steel Wind" and "Smoke Creek." Regardless of the particular horn, however, Baczkowski wrestles mightily with his demons on each, looking for some possibility of redemption, or at least release, by the end of each cut.

Lopez and Corsano certainly keep pace with and complement Baczkowski's relentless ferocity. Lopez's deep, thunderous sound fuses well with Corsano's waves of percussive power, providing the inexorable momentum needed to sustain Baczkowski's most tempestuous bursts. There are brief respites here and there where things settle into temporary calm, before once again reaching incendiary fervor. It's during these moments, interestingly, that Lopez and Corsano coax Baczkowski into a somewhat more jazz-inflected spirit. The tail end of "Bend in the Shore" is a case in point, with some soft-hued bluesy licks emerging from Baczkowski's baritone; and "Steel Wind" allows Baczkowski to go into bop mode for a minute while Lopez and Corsano tease out a swinging rhythm behind him. But fleeting moments of tranquility are not what will draw fans of this music to this record. Unbridled, unyielding fury is what matters here; and there is more than enough of it to satisfy even the most demanding free-music enthusiasts.