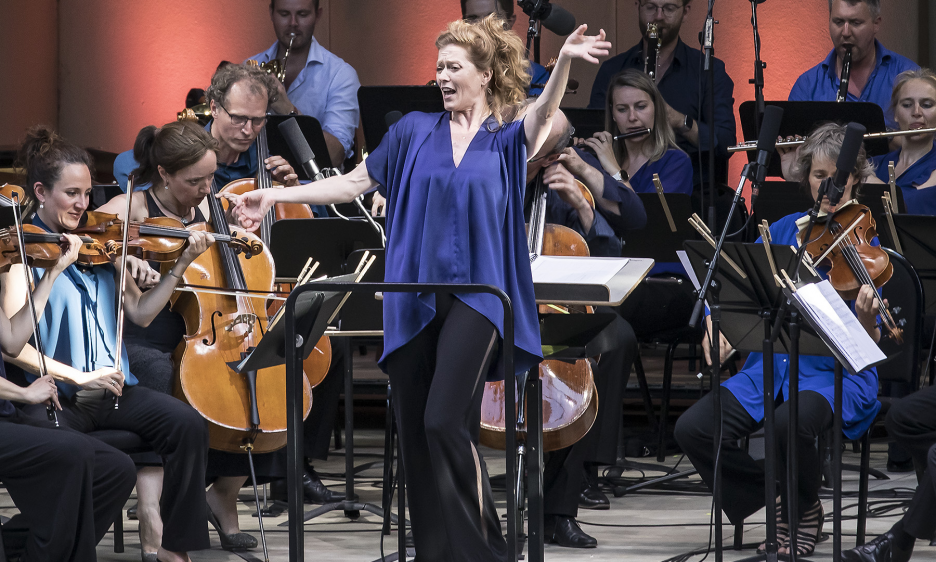 Suddenly, in the past few years, the jazz portion of the (contemporary music-geared Ojai Music Festival) story has been shifting and expanding in relevant ways... this year's roster included jazz- related artists John Zorn, Tyshawn Sorey, and Mark-Anthony Turnage.

In the storied and still-evolving story of the Ojai Music Festival, one of America's most important contemporary music-minded festivals, the roots system run deep into mid-century Modernism and late 20th century post-Modernist impulses and up to the current, pluralistic musical minute. The idyllic hideaway town of Ojai—an hour and a world away from Los Angeles—drew Krishnamurti here as a pilgrimage site-maker and lured subsequent waves of mystics, artists, urban escapees, bohemians, and, thanks to the now 73-year-old festival, a hallowed legacy of living classical musical giants for one week a year.

Stravinsky was here twice as musical director in the '60s, and his music continues to be a signature, as it was in June, when this year's inspired music director, conductor-soprano Barbara Hannigan opened the 2019 festival with her new take on Stavinsky's opera Rake's Progress and had his neo-classical charmer, Pulcinella Suite, on the closing night program. The list of composers who have directed and or been featured in Ojai includes Aaron Copland, John Adams, Lukas Foss, Esa-Pekka Salonen, Gyorgy Kurtag, Olivier Messiaen and several visits by the late, great Pierre Boulez.

Quite naturally, jazz—along with serialism, the most important musical invention of the 20th century—has a place in the larger matrix of the musical program here but has had a checkered history of finding its way into the festival's conversation. The festival has experimented with token jazz sets by Los Angeles players, with strange results. Perhaps the most successful jazz-rooted occasion at least in this Millennium came in 2001, when British composer Mark-Anthony Turnage's powerful jazz-classical piece Blood on the Floor was a featured work: originally done with John Scofield as soloist, the Ojai performance put guitarist Mike Miller in the spotlight, and he rose to the challenge beautifully. Suddenly, in the past few years, the jazz portion of the story has been shifting and expanding in relevant ways. The process has been twofold, in terms of ushering into the festival musicians primarily associated with jazz and reflecting the recent phenomenon of jazz artists who refuse to be pigeonholed strictly as jazz artists, and who are skillfully venturing into "chamber" variations on the j-word, through-composed commissions and other classical music manners. This new trend hit a high mark in 2017, when Vijay Iyer was brought on as music director by long-standing artistic director Tomeka Reid, Kyoko Kitamura, Taylor Ho Bynum, Joe Morris (who retired this year), and whose musical plan included an Indo-Jazz concert, Iyer's own "serious" music (including a new Violin Concerto featuring Jennifer Koh), George Lewis' AACM-geared opera, the Iyer sextet, and the reckoning force that is Tyshawn Sorey—as drummer in his band, leader of a "conduction" performance and as composer. Significantly, the 2017 "jazz year" also gave a high-profile venue to one of the last performances by The Trio—the super-trio with Roscoe Mitchell, Lewis and Muhal Richard Abrams, who died not long after that great Sunday morning encounter in Ojai's Libbey Bowl.

In the 2019 program, Sorey—who had also appeared in the 2016 Ojai festival, premiering a workshop version of his Josephine Baker meditation for the sensational soprano Julia Bullock—again showed up, only as composer in absentia. Sorey's piece Everything Changes, Nothing Changes was performed by the ever-on-it JACK Quartet on the first of three "sunrise" concerts at 8 a.m.—among the more provocative events of the long weekend. This concert took place at the meditation outpost called "SANE Living Center" (a very Ojai moniker, that), and opened with Clara Iannotta's atomically atmospheric dead wasps in the jam-jar, an ideal concert-mate for Sorey's dogmatically soft, breathing, microtonally-inflected and dissonant chords laid out by the string players with a calm reminiscent of Morton Feldman's music.

Also on Hannigan's 2019 roster, for that matter, was another figure the jazz world likes to claim as one of their own, against his will— John Zorn in composer mode (and not physically present), offering scores by the bushel (mostly in his knotty and naughty "classical" mode, nailed by the JACK Quartet, though with gleaming bits of his natural jazz language sneaking in). Zorn's classical work can be both exciting and taxing, with a complexity fixation that can seem overwrought, as if he's trying to hard to be accepted in the "serious music" orbit and hasn't learned yet to relax in that mode. That said, the high point was Zorn's five-movement Necronomicon, with its mix of in-your-face atonal gymnastics and moments of subdued, enigmatic beauty, even with moments suggesting jazz balladry and harmony.

We also savored another jazz-infused—and tragic themed—work by Turnage. His works have often been infused with sad circumstances, from the drug overdose death of his brother in Blood on the Floor to the melancholic twist on Ralph Vaughan Williams, ala jazz, A Man Descending (featuring Joe Lovano as soloist). This year in Ojai, we got his spin on the true story of an abused woman sent to prison (now released) after defending herself against her raging husband in his 1997 piece Twice Through the Heart. Turnage is unique in his ability to weave together a post-serial language evoking Anton VonWebern with viable jazz fluent lines, revealing his deep love of Miles Davis and other jazz influences, without that idiom-clashing "Third Stream" aftertaste.

One takeaway verdict from this year's festival was a sense of awe over its music director. Hannigan, who began as a soprano to the stars of contemporary music twenty-plus years ago and has shown herself to be an important conductor in recent years, is staggeringly and organically gifted. All weekend, she dazzled, as a soprano who navigated "Embraceable You," the thorny twists of Zorn's alternately lyrical and spidery Jumalattaret—based on the Finnish epic Kalevela and premiered at last year's Jazz em Agosto fest in Libson—as well as the haunting incantations of the late "Spectralist" master Gerard Grisey's Quatre chants pour franchir le seuil, quite possibly the pinnacle of the entire festival.

Grisey might not immediately spring to mind on lists of classical composers most likely to have an impact on—or be considered a parallel language to—the jazz canon by any traditional definition. Even so, the world-renowned Ojai Festival's style scope is presently in a fascinating widening phase, taking into account six degrees of jazz and the shifting creative strategies of many emerging and presumable "jazz" artists. It's a trend worth keeping tabs on.