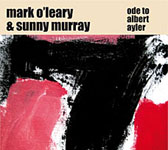 The digital download-only Ode To Albert Ayler captures gifted Irish guitarist Mark O'Leary improvising with free-jazz and former Albert Ayler and Cecil Taylor drummer Sunny Murray during a 2002 studio session. Here, O'Leary delves into free-form jazz shaded music at the onset of his recording career, prior to his extensive recording projects for Leo Records and other European record labels.

O'Leary gels into various frenzies amid Murray's textural drumming, where the artists perform within the spirit of Ayler's power-packed onslaughts. Throughout these largely, high-impact duets, Murray initiates a swarming rhythmic path by smothering his drum kit with asymmetrical and polyrhythmic cadences. He sculpts a broad foundation for O'Leary's ascending and rippling single note jaunts, occasionally treated with various distortion and volume control techniques.

The musicians dish out an immense and rather buoyant wall of sound while projecting a multihued musical terrain. They produce an abundance of geometrical shapes via oscillating undercurrents and go for the proverbial jugular due to bursting dynamics, especially when boosting the overall pitch and tone. However, O'Leary moderates the climate on "Spiritualized," which is an ethereal, free-form acoustic guitar vamp, shaded by Murray's accenting cymbal swashes, and someone making comments in the background.

O'Leary and Murray work well together. The album offers a peek into the young guitarist's initial assault on post-jazz frameworks, where improvisation rules the roost and the musicians' insightful and synergistic dialogues loom mightily throughout.