By Matthew Warnock
April 16, 2009
Sign in to view read count 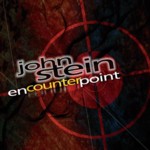 Guitarist John Stein has brought together an all-star ensemble for the album Encounterpoint and these world-class musicians deliver on every tune. The ensemble cast of Koichi Sate, keyboards, John Lockwood, bass, and Ze Eduardo Nazario on drums and percussion are always on top of their game. Whether it be a funk groove, hard swinger or relaxing bossa-nova tune, the energy and interaction are always solid throughout. With a band of this caliber it would hard for anyone to sound less than their best, but Stein is not one to rest on his heels as he pushes the band to new heights of creativity and emotion during his melodic interpretations and improvised solos.

Stein draws upon a wide variety of styles and influences with the tune selection on Encounterpoint. The album begins with the classic Duke Jordan tune "Jordu," which Stein has arranged to alternate swing and bossa feels during the melody sections while the solos remain in a bossa feel. There is a strong Brazilian influence throughout the album especially on the bossa-nova standards "Dindi" and "So Danco Samba," and with Nazario behind the kit there is always an element of Latin influenced groove creeping up in each song. Aside from the bossa-nova tunes there are also several hard-swinging bebop pieces such as "Close Your Eyes," a Monk influenced "Half-Whole Blues," and the funk-based "The Roundabout." The wide variety of musical styles prevents the album from becoming repetitive and allows each musician the chance to stretch in multiple musical situations.

Stein's playing is stellar throughout the album as he always seems to know when to burn, when to play melodically, and when to just lay out and let the band take over. Stein draws heavily from his bebop vocabulary throughout the record, though he never sounds repetitious and has a knack for twisting his lines and melodies into unexpected territory. Though he leaves most of the chord work to the more than capable hands of Sato, Stein does provide two simple, yet highly effective, chord melody introductions to the tunes "Line Drive" and "Dindi," with the latter being one of the albums brightest moments.

John Stein has really lifted the bar with Encounterpoint, not only for himself but for the jazz guitar quartet genre in general. The mixture of styles, world-class ensemble, and effective tune selection all combine to bring the most out of each individual musician and the group as a whole. The result is an album that is both intellectual stimulating and easily accessible at the same time.