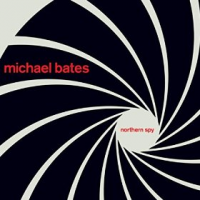 Did you ever get a bit envious listening to a recording and thinking the band is having way too much fun making music? I'm not saying Northern Spy stirs up jealousy, but damn the trio of bassist Michael Bates, saxophonist Michael Blake and drummer Jeremy "Bean" Clemons are up to some serious jollification here.

This, Bate's ninth release as a leader, diverts from the complex post-bop sounds of his Outside Sources band and Acrobat, his take on Dmitri Shostakovich. Here the influences are stated to be Curtis Mayfield, Donny Hathaway, Otis Redding, Blind Willie Johnson, George Mitchell's field recordings, and John Coltrane. In short the R&B Mick and Keith referenced (ah-um, stole) to form The Rolling Stones. Maybe that's where we get the title, as both Bates and Blake are Canadian born, now New York residents.

Bate's choice of Clemons perhaps came from their work with Joel Harrison and the saxophonist was an easy choice. Blake's tribute recordings to Lucky Thompson, Coleman Hawkins and Lester Young show his chameleon-like ability to shift perspective, but swing hard.

The disc opens with a droning blues, hum/sung by the players and addressed to Blind Willie Johnson. "Essex House," written (let me guess) in homage to the place where soul singer Donny Hathaway's body was found, blares forth with ribald blues tenor over the loud/quiet groove. This band eats blues for breakfast and excretes jazz. They mash-up Curtis Mayfield and Otis Redding with "An Otis theme On Curtis Changes," opening with Bates' statement of the theme that gets contorted by Blake and ultimately smoothed out by the trio.

Like the finest blues recordings, this session was captured in the style of the band's live performances. Each track was captured in one, maybe two takes, and has that 'in the flesh' feel of a live recording. The aforementioned Coltrane thread is heard on "End Of History." Here, the band builds it's house upon the blues, just like the great man did with a song like "Alabama." The only track not penned by Bates here is Johnny Mandel's "Days Of Wine And Roses" which is artfully presented with just the right amount of melancholy. The disc ends with the heaviness of "Neptune," a song that draws equal parts from Trane and acoustic Led Zeppelin. Oh my! No, northern spies.