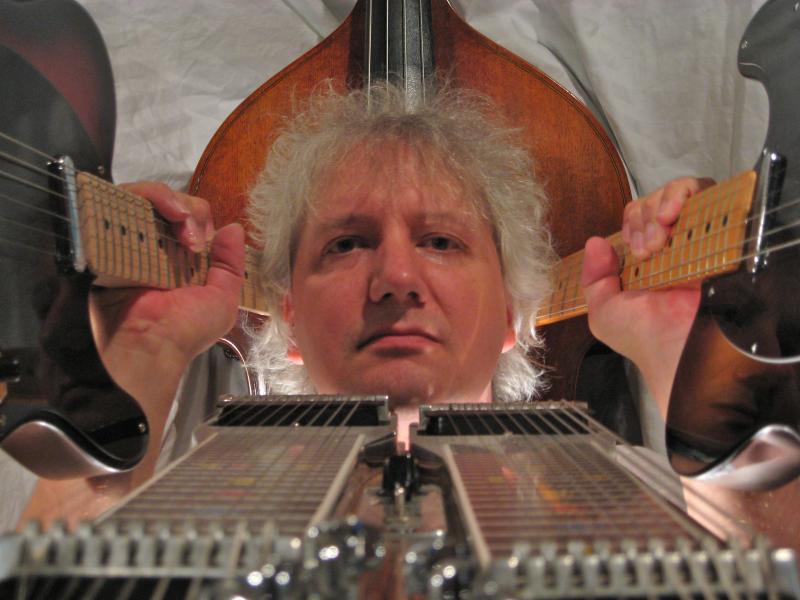 BY ANDREW J. SAMMUT
December 23, 2011
Sign in to view read count
Norm Zocher
Outpost 186
Cambridge, MA
December 6, 2011
Norm Zocher is well known for his guitar work on Boston's forward-thinking jazz scene, as well as gigs with Maria Schneider, Steve Lacy, Bob Brookmeyer, Esperanza Spalding and local mainstay the Jazz Composers Alliance Orchestra, all between teaching at Berklee College of Music and New England Conservatory. On December 6 at Outpost 186, Zocher made his hometown debut on the unusual jazz double of pedal steel guitar. Yet Zocher's Western swing via country "axe," his relaxed, occasionally carefree approach, and influences from bop to rock and fusion were there to serve thoroughly exploratory ends.
Outpost 186 set an easygoing atmosphere from the outset. Its fold-up chairs, photos of past performers lining white walls and lone bay window behind the band recalled a Harlem rent party transplanted to a New England living room. Zocher's band mates asking if he had a set list sealed the laidback feel, with the guitarist/composer/leader joking to an audience of friends and students about his instrument's lengthy setup and resulting late start.
Drawling swing and space-age textures on Thelonious Monk's "Misterioso" made the wait more than worthwhile. Zocher's imagination as an accompanist was felt in the organ-like punctuations behind guitarist Bruce Saunders' clean, unaffected blues and the descending harmonies encircling Bruno Raberg's bass. In solo, Zocher revealed a beautifully vocal sense of line with tangy asides dissolving into extended dissonances. Outpost 186's flat acoustic was also noticeable from the start, at times obscuring ensemble balance in favor of Zocher's amplifier and Dave Jamrog's drums.

The quartet fared much better on an unnamed Zocher original featuring a funky groove and tough-talking melody. Saunders' symmetrical lines cued Jamrog to lock into the beat, setting the stage for stormier guitar lines capped by harmonic deconstructions. Zocher slid spicy high notes underneath Saunders, before upping the ante during his own solo with edgy, at times vicious dissonances. Morphing into jazz-rock, the tune closed with pedal steel guitar, guitar and bass riffing behind Jamrog's thrashing snare and choked cymbals.

At the other end of the emotional spectrum but equally riveting, Zocher's aptly titled "Country Tune" unfolded like last call at the corner saloon, while slipped notes and a muddy mix marred his spacious "Ballad." Zocher's rapid arpeggios, smirking chords and sardonic turns of phrase nonetheless set a reflective, at times bittersweet mood.

As Zocher himself pointed out, "the 'steel' likes slow." Coltrane's "26-2," taken at a relaxed medium tempo, suffered from another rough blend (as well as the drummer pushing the beat) and Zocher losing time in solo; his glissandos and bent tones just didn't lend themselves to fleet bop phrasing and staccato inflection. Fortunately Räberg kept steady time in both ensemble and during an adroit solo. Things turned tight by the return to the head, indicating greater familiarity may breed spectacular results.

The evening closed with an intriguing 7/4 arrangement of the Rodgers and Hart standard "Have You Met Miss Jones?" Fast clip and instrumental idiosyncrasies aside, Zocher impressed with a cheeky paraphrase, clipped patterns and a humorously spiky tag. Hopefully Zocher's instrumental curiosity is not simply a side project, and this group will continue to fine-tune without losing any of its energy. Slight missteps aside, this set combined a progressive mindset with the perennial excitement of discovery.