By Bruce Lindsay
April 28, 2010
Sign in to view read count
Pianist Norberto Tamburrino is based in the sunny climes of southern Italy, but his jazz influences come for the most part from the thriving US scene of the 1940s, 1950s and 1960s. He's happy to credit Bud Powell, Hank Jones, Lennie Tristano and Art Tatum as influences, but above all it's the influence of Thelonious Monk that comes across most clearly in Tamburrino's playing. Indeed, his 2009 album Reflection(s) On Monk (Philology Jazz) was clearly influenced by, as well as being a tribute to, the great musician. The spirit of Monk pervades Tamburrino's playing again on the two albums reviewed here, but there is too a strongly reflective and personal feel to his work. 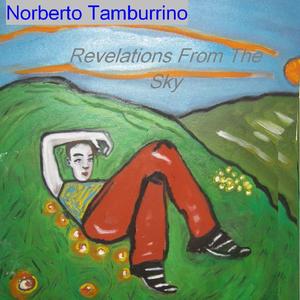 Revelations From The Sky finds Tamburrino playing in solo, trio and quartet formations, exploring a range of moods and tempos. Monk's influence on Tamburrino's playing is most obvious on the opening track, "Revelations From the Sky," which sees the pianist's chordal playing underpinning the tune's dominant musical force, the tenor sax of Roberto Spagnolo, while drummer Marcello Nisi provides a slinky percussive beat. Spagnolo also dominates "Praterie Dell'Infinito," while Tamburrino's own playing is fluid and lyrical and bassist Francesco Mariella adds a strongly-played bass solo. Monk's influence is less obvious here and as the album progresses Tamburrino continues to focus on this more lyrical, smoother stylistic approach.

Benny Carter's "When Lights Are Low" is given an intriguing treatment. Initially the Monk influence resurfaces and Tamburrino then alternates between this angular, jagged approach and his more fluid playing across the remainder of the tune. For "Indaffarato," Tamburrino is joined by the rhythm section of Joseph Lepore on bass and Bruce Cox on drums—both musicians played on Reflection(s) On Monk. These experienced musicians bring a strength and confidence to the music that is at times absent from the playing of Nisi and Mariella—as a result Tamburrino's own playing seems stronger and freer, creating the most complete tune on the album.

The final three tunes are solo piano pieces. "Felinity" is another tune characterized by angular playing and rhythmical changes, "Some Brilliant Shadows" has a lovely, delicate melody and "The Son(g) is Born" is a slow and beautiful ballad which sees Tamburrino in a particularly reflective and gentle mood.

Ascoltabile Piano And Atmospheres was recorded in Taranto, Italy, between December 2007 and December 2009 and showcases Tamburrino's solo piano—with the exception of one track, "Is Atlantis On The Sky?," which features multi-tracked electric piano and keyboards. The first seven tunes are compositions, while the remainder are improvised pieces which Tamburrino refers to as "Atmospheres."

The distinction between the composed and improvised pieces is not always clear. "Ascoltabile Piano," for example, is composed but its abrupt ending gives it the feel of an improvised piece, while the structure of "Mad Wars Atmosphere" makes it sound more like a composed tune. This lack of distinction is more of an academic issue than an aesthetic one, for it makes no difference to the experience of hearing the performances. The multi-tracking on "Is Atlantis On The Sky?" gives the tune an ethereal choral feel, but the overall effect tends to overwhelm the central theme of the tune, played on electric piano. The solo piano tunes, whether composed or improvised, are much more successful; Tamburrino connects effectively with the acoustic instrument, producing attractive, thoughtful performances across a series of brief and reflective pieces.

The overarching impact of Ascoltabile Piano And Atmospheres is a gentle one. The variations in tempo and mood to be found on Revelations From The Sky are absent here and the result is a far more consistent experience. Tamburrino's playing is emotive and thoughtful, and the tunes fit together to create a quietly contemplative album.

Tracks: Revelations From The Sky; Praterie dell'infinito (Prairies Of Infinity); Play A Rubato Song With Joy; When Lights Are Low; Latin Ramblas West; Indaffarato; Some Brilliant Shadows; Felinity; The Son(g) Is Born.