Maximize your visibility at All About Jazz by upgrading your musician page from standard to premium. With it, you'll receive All About Jazz home page exposure, a highly stylized / ad-free musician page with bonus features and benefits, an ad, plus you control where you sell your music and so much more.
Learn More
246 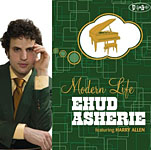 It is rare indeed to discover a young pianist, so obviously neither a baby nor a Baby Boomer, who is steeped in the history and tradition of American music from the turn of the twentieth century onwards. To find he can write a mean blues is a wonder and more than a joy to hear. To then get him in the studio in the company of someone like tenor saxophonist Harry Allen must be any producer's dream, but Marc Free made it happen. Ehud Asherie and Harry Allen are swinging madly on Modern Life. The two musicians seem soul brothers and though several years may separate them, they appear to be attuned to each other's consciousness as if they were twins.

Asherie is a pianist who has obviously listened to Tommy Flanagan and perhaps even Jimmy Rowles. As a composer, Asherie is influenced by the compositional style and early music of Hank Jones. Asherie flavors the melodious twists and turns of the charts he writes, but he's his own man as a soloist, with a right hand that rolls delightfully over the black and white. His expression is genteel, and his dynamic is so tuned to the rhythm of what he is playing, he would be wonderful to dance to. His pianistic vocabulary when he solos is sophisticated. He tantalizes with darting phrases and lines that suddenly stop, then fly off again. And when the line returns it is often inside out, a steady flow of surprises unfolding in its wake. To that extent, both his blues are wonderfully crafted with uncommon erudition. The two blues—"Blues for George" and "One for V"—feature some exemplary writing. The elemental sadness of the melody hangs as the chart is paced just about half a beat slower, enough for a noisier tug at the strings of the heart.

The rest of the fare seems to have fallen into the musicians' studio full of stardust. It might have been calculated to provide a feature for Harry Allen. And this tenor saxophonist steps way up to the spotlight to play his part. His tone is low and majestic, sliding with almost divine glissandos from line to line. His broad sliding lines curve through the air and embellish every melody he plays, especially on "I've Told Every Star," crafted by Jerome Kern. "No Moon at All," the David Mann/Redd Evans classic, penned in 1917, which says much about how far the musicians were prepared to go to preserve the emotion of the set is also wonderfully rendered recalling—almost—the fey character of Julie London's 1927 classic performance. On Billy Strayhorn's "A Flower Is A Lovesome Thing," Allen and Asherie virtually caress the melody in a spectacular, sensuous manner that keeps the air charged with emotion.

It would be sheer fallacy not to also acknowledge bassist Joel Forbes and drummer Chuck Riggs, who have a symbiotic feel for the program. It is hard to imagine a better rhythm section that plays with such sensitivity for the material, or for the album's stars to shine ever brightly.