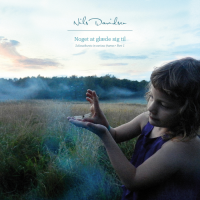 Now and then a heavy instrument with low and deep resonance can sound very light; now and then a series of freely combined tones can nonetheless have a strong melodic feel; and now and then very mobile playing can sound tranquil. The double bass is a heavy, low register instrument, but in the hands of some musicians it can be turned into singing wood and curved air. All this applies to the music on this solo outing from Danish bassist Nils "Bosse" Davidsen, Noget at glæde sig til, which means "Something to look forward to."

Noget is a playful feast of timbre and tonal colors, conjuring glimpses of pure gladness and wonderment. Listening to the music, you'd like to be the bass played by Nils Davidsen. He approaches the double bass sound as a family of tonal colors, tempos and techniques, treating every member in its own right but also let them all come together along an invisible line. More wondrous, still, there seems to be a unifying force at work behind this collection of pieces; a hidden overall structure seems to resonate.

Davidsen's music has plenty of colors across the different registers of his instrument, always very close to the human voice. There is an airiness, with a special timbre, and there is a chalky sound, with an ever-singing substance that constitutes the beauty of Davidsen's unique voice. From numerous solo concerts, Davidsen found his way into a special alliance of freedom and the responsibility of connecting, relating things in the process of creation and improvisation. "It's not only about free improvisation," the bassist writes. "It's about creating unique vibes. Putting up a zone and setting my imagination free inside this zone." It functions as a device, suggesting cohesion and generating sense- making potentials. The album contains nine pieces with one double bass, one with two and another with three instruments involved ("Extraterrestrial breakfast"). And what's in the bass solo titled "With No Hands"—the sound of gazing at the strings? Every piece, varying from one to seven minutes, has its own surprises, smiles, delights and things to enjoy.

Davidsen is one of the most accomplished and most in- demand bassist of the Danish scene. He has performed and recorded with the likes of Django Bates, Tim Berne, Carsten Dahl, Marc Ducret, Bunky Green, Dave Liebman, Bobby Previte, John Tchicai and Simon Toldam. Noget is the successor of 2013's brilliant duo album Zone Bleue (ILK), with trumpeter Kaspar Tranberg.

Recorded in 2013 at various locations, as a special honor Davidsen was invited to record at Copenhagen's impressive Grundtvigskirken. Other tracks were recorded at Oslo's Rainbow Studios (a side-activity during a recording session of the Carsten Dahl Experience) and some originate from private recordings at Heimdalsgade Laboratories. In addition to Noget at glæde sig til's audio tracks there is also an art video by Sara Lubich, as well as two additional videos by Pelle Folmer, showing Davidsen playing in the huge space of Grundtvigskirken, both the result of new and close cinematic/musical collaborations.