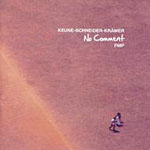 Improvised music is rife with precedents in these early years of the twenty-first century, both on record and otherwise. The one for the trio of saxophone, bass and drums was set under the leadership of Sonny Rollins over half a century ago and since then the line-up has been amply documented on record. Set against those precedents the music here covers an awful lot of ground, but in so doing perhaps loses a certain depth of identity.

Not that this is down to any shortcomings on the part of the musicians themselves. All three players are conversant in the language of free improvisation and they have the lightning-fast responses the music demands. On "Handpicked" this is manifested in small, spare gestures, with the music progressing not so much by stealth as by quasi-secret common understanding. Stefan Keune on alto saxophone sometimes lapses into Anthony Braxton's otherwise singularly stuttered vocabulary, but his phrasing is his own, especially when he puts out smeared, slightly visceral lines like a man acting the provocative agent. Paradoxically, when the energy level does rise it's as a result of collective endeavor, as opposed to that provocation.

On "Splinters" it's abundantly obvious that this is a leaderless group for all of the piece's brevity. Collectively speaking, the musicians are not in awe of the moment, but neither are they anxious to mark its passing with noise. The discussion between all three musicians is still intense, and Keune distinguishes himself on baritone sax by dint of both economy and restraint.

For Keune the utility of screaming through the large horn is severely restrictive. He proves as much even on "Rough Edges," where the discussion is more animated and Achim Kramer, the colorist, comes to the fore on drums. Hans Schneider gets as close as he ever does to maintaining a line on bass, even while his work perhaps echoes Gary Peacock's feel for broken, irregular momentum. When animation does get the better of him, Keune equally echoes Evan Parker's fractiousness.

That said, there's enough here to refute the charge that this is mere energy music. The methodology of "Spick And Span" is different entirely, and it's as if the trio began playing with a shared understanding. Such calculation as that might imply is however not part of the deal, and the music accordingly echoes the Spontaneous Music Ensemble when the line-up consisted of Trevor Watts and John Stevens. It shares also a similar inscrutability of method.