Advertise
28
Catching Up With

Nils Petter Molvaer: The Trumpet Does the Dreaming 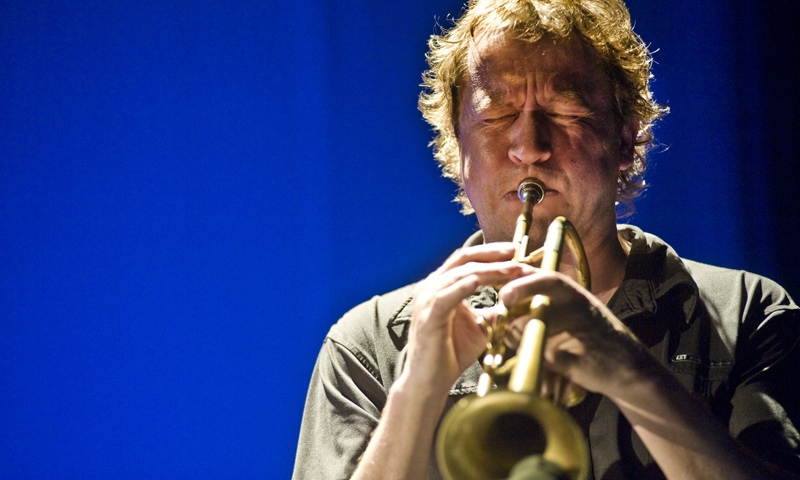 By Adriana Carcu
November 16, 2013
Sign in to view read count

I want to do something different each time I play. There is no point in repeating things.
—Nils Petter Molvaer

Nils Petter Molvaer has long reached the musical excellence that places him amongst the most accomplished contemporary jazz musicians. As an early exponent of Nu Jazz, he mapped out a virgin musical territory and contributed to the branding of the Nordic Sound, today a genre in its own right, and still in full expansion. Molvaer's sonic hallmark—traced back to Miles Davis by many jazz critics, and accredited by himself to Jon Hassell—has that unique quality in which the ethereal dreaminess of tone and the abyssal richness of textures coexist.

His most recent collaboration project, realized together with the electronic musician Moritz von Oswald, allows him to explore a new sonic environment. The album, suggestively called 1/1 (EmArcy, Universal Music Group, 2013) is structured on an elaborate rhythmical interplay in which the meticulously processed beats, the elegant trumpet insets and the expectant recesses play just as great a role. Presently the musician is in the process of accomplishing a new project that will mark, yet again, another break into new grounds.

All About Jazz: There are three years, almost to the day, since our first interview. If you were to use only one word to describe the time that has passed, what would that word be?

Nils Petter Molvaer: The word would be: short. Time is passing very quickly these days.

AAJ: How would you describe it in more words?

NPM: It has been an interesting and very challenging time. I had very many projects, most of them happening in parallel, two or three at a time. Managing that and focusing on so many things at the same time can prove to be a real challenge but also brings along certain freshness.

AAJ: What has changed in these years?

NPM: Well, I got older and I hope that also a bit wiser (laughs). My musical surrounding kept changing a lot. I have been playing with musicians of different orientations like Jan Bang, Eivind Aarset, Stian Westerhus, Trygve Seim, Trilok Gurtu, and Manu Katche, or with quite young people like the Swiss band Brink Man Ship and enjoying every minute of it.

AAJ: 1/1, your new album recorded together with Moritz von Oswald has just been released. It has a quite different sonic impact than Baboon Moon (Sula Records, 2011), the album recorded with Stian Westerhus. To what inner need is this transition responding?

NPM: Baboon Moon was more Stian Westerhus' project than mine, so he had a stronger imprint on it. In 1/1 there was a lot more cooperation involved. I could do more what I wanted there and move about in other directions. I really wanted to explore the dub techno sonic universe for quite some time, and in some way it brought me back to the nineties, when I was listening to that kind of music and wanted to play on it. You may find there some rhythmical similarities with my first album, Khmer (ECM, 1997), which actually comes to show how far back the traces go. It was great fun to work with Moritz, but in the bigger frame of things I think that you can call it rather a side-project.

AAJ: How did the synergy work?

NPM: It was challenging in a very nice way. It challenged my own perception about what I was doing, the way I was placing myself in a musical environment that was very basic and very dense at the same time. But if you listen attentively, you realize that the sound is very deep and quite well structured. It consists on many loops put together in a very elegant manner. The challenge was to move in a minimalistic space with so much room and not to overplay, not to crowd it with unnecessary sounds. So there was also a lot of listening and waiting there, which I had to learn. You also have to be as precise as can be in order not to alter anything, just like finding your own path. We had 150 minutes of music and we trimmed it down to around 60 minutes, and, of course, we had to consider many choices along the way. Mixing can prove to be quite a challenging task as well, because at some point in becomes hard to decide what you want to leave and what to cut away.

AAJ: To what extent is a recording based on improvisation and how can that be reproduced in concert?

NPM: This new album was from my side based hundred percent on improvisation. There are a couple of themes, which just came up, like the one in "Step by Step," and when I play again I use those as a starting point. I also used some stuff from Solid Ether (ECM, 2001) and I realized that it worked all right. Other than that the show is quite different from the album and it has to be like that, because I want to do something different each time I play. There is no point in repeating things. I may make some hints to some old themes in the show and just see what happens.

AAJ: Along your career you have written quite a few beautiful themes. Do you have a favorite track?

NPM: Let me see, I never thought about it. I like "Icy Altitude" from Hamada (Sula Records, 2009). It is a deeply melancholy song that has a kind of calmness and a precision I like. I also like "Little Indian" from NP3 (ECM, 2002) or "On Stream" from Khmer, which are quite different, but I think that they represent me in a way.

AAJ: What are you working on these days?

NPM: I am just in the finishing phase of a big project, which is quite different both from Baboon Moon and also from 1/1. I've been working for a couple of years now together with Tord Knudsen who is doing the visuals, and Jürgen Lörschen doing the mixing. The project is called Lucid Dream. It will contain quite a few new elements I've been thinking about for many years, and which now became possible. Like, for instance, to use the pedals of the E-guitar for the trumpet sound. The album is recorded together with Geir Sundstø, strings, steel guitar, Indian guitar, banjo, Morten Quenild, keyboards, and Erland Dahlen, drums, percussion and guitars. I will play trumpet, of course, but I will also do a few other things on the album, like strings and bass. The show will be like a path leading through the forest at night with all the lights and sounds and signals you experience there, which are engulfing you in a dreamy experience. It will all happen, of course in the dark. We are in the mixing process and the album will most likely be released in March, next year. I also plan to go on tour with a Norwegian choir in a sextet formula. And then I am going to take a break and rest.

AAJ: Does success affect you in any way? What do you make out of it?

NPM: It does not affect me on the personal level, but it makes me happy that people want to come and listen to what I am doing. If nobody came and nobody wanted to hear it, then it would probably affect me more. Then I would probably think about doing something else.

AAJ: What else would you like to do, if it weren't for music?

NPM: I would be a gardener then, probably a good one, because I like gardening a lot. Or maybe I would go ahead and study anthropology. Before I started doing music in a serious way, I've done a couple of other things. I can lay bricks, I can do building isolation, I have also worked in a fishery but the only thing I really enjoy doing is music.