BY MARK CORROTO
November 16, 2013
Sign in to view read count 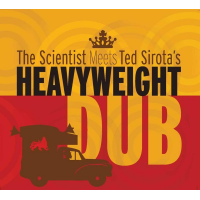 Those familiar with Sirota's work in Sabertooth, who released Dr. Midnight (Delmark, 2007) and their longstanding gig at The Green Mill, might find this music foreign. But listeners to his Rebel Souls records, Breeding Resistance (Delmark, 2004) and three prior Naim releases, will find the ingredients that inspired this dub Record.

He enlisted dub master Hopeton Overton Brown, AKA "The Scientist," an originator of Jamaican dub, to record this session. While it is not purely a 'dub' record, because it is an original recording (not a remix), the dub influence is apparent in the sounds of the drums and bass. Fans of the echo and reverb of dub won't be disappointed. Sirota delivers a roots-steady pulse throughout. His inclusion of vocals and a hip-hop verse keeps things interesting throughout.