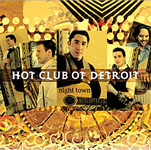 The Hot Club of Detroit will without a doubt soon be among the most popular bands playing in the gypsy tradition of jazz manouche. Django Reinhardt's band, the Hot Club de France, first brought the fiery, flamenco-infused sound to the realm of jazz. In homage to and elaboration of the tradition, the HCOD presents its sophomore release, Night Town.

Despite the referential name, the Hot Club of Detroit doesn't just follow Reinhardt's footsteps. This quintet's sound is bright and clean: in a style that prizes speed and rhythmic dexterity, the HCOD sounds like it's flying high and doing it with ease. It tips its hat to Reinhardt regularly, in both technique and repertoire. But it also draws on a different vein of jazz: the polished, urbane sound of Duke Ellington, Johnny Hodges, and West Coast Jazz. What happens, then, when you combine the gutsiness of jazz manouche with what Paul Desmond called the sound of a dry martini?

The band is prone to short performances of tunes that are prepared, confident, and not without brilliance, as "Sweet Substitute" rolls out a sweet, laid-back melody on Carl Cafagna's soprano saxophone, then sweeps into a double-time chorus where leader Evan Perri's guitar and Julien Labro's accordion come to the fore in equal measure.

Reinhardt's original Hot Club de France had no accordionist, and the effect on the band's harmonic texture is significant. In a gypsy jazz band the guitar has two tasks: to give the harmonic backdrop and to strum a regular harmonic pattern, thereby replacing the drummer. Here, though, the accordion's dominant timbre takes over the harmonic role, making the guitarists generally rhythmic accompanists.

As a soloist, Labro's technique is interesting: on an instrument overwrought with Clichés, he manages to play with originality. On "Speevy," he progressively develops his own motifs, and occasionally throws in chords from jazz organ vocabulary. It's creative and compelling work.

Still, the band plays its best in conventional forms. "Pour Parler," by contemporary Parisian musician Romane, stands up strong next to lesser-known Reinhardt varietals like "Melodie Au Crepuscule" and "Valse A Rosenthal." But the HCOD also branches out—to genre-appropriate choices like Jelly Roll Morton's "Sweet Substitute" and the torch-song standard "J'Attendrai," as well as the occasional unexpected effort. Miles Davis' "Seven Steps to Heaven" makes a peculiar but entertaining appearance, as does the Gene Ammons/Sonny Stitt classic "Blues Up and Down." Both of these are fun and well-arranged, but they fall somewhat outside the purview of the band, and don't hold up as well as the songs traditionally built for jazz manouche.

Of course, Django Reinhardt remains the clear forefather of this group, the foundation for all its work. But as it finds its feet and begin to stretch out from the formula of gypsy jazz, the Hot Club of Detroit has innovations all its own in store.