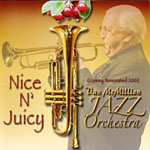 For over a decade, brass master Dan McMillion, an alumnus of the Woody Herman and Buddy Rich ensembles, has been maintaining the legacy of Maynard Ferguson to a very high standard in the Central Florida region, winning a Grammy nomination for Up Your Brass (Sea Breeze, 2002). This sixth release—dedicated to the memory of McMillion's wife Lillian, who passed away earlier this year—continues in this vein, with McMillion fronting a fifteen-piece band consisting of some of the finest musical talents in the Tampa area.

The Ferguson repertoire represented here spans half a century, from Willie Maiden's 1957 chart of "My Funny Valentine" to Denis DiBlasio's "Surviving Soho" and "Vita Bella," both of which appeared on Ferguson's final recording, The One and Only Maynard Ferguson(Maynard Ferguson Music, 2006). "MacArthur Park" and "Hey Jude" are both adapted from arrangements by bass trombonist Adrian Drover for Ferguson's celebrated early-1970s British ensemble, while the title track was composed by Jeff Steinberg (who later contributed "Gospel John" to the Ferguson library) for the LP M. F. Horn Three (CBS/Columbia, 1973). The latter three tracks all present Richard Drexler re-creating the Fender Rhodes artistry of the late London-born keyboardist Pete Jackson.

McMillion also salutes his ex-bosses Rich and Herman with two classics from their respective libraries. Glen Bush's drums spearhead Pete Myers' chart of the Cole Porter standard "Love for Sale," which was a Rich stalwart, with solo appearances by altoist David Moss and trumpeter John Robinson. Originally recorded by the Second Herman Herd as "That's Right" in 1949, Shorty Rogers' "Blues Express" was re-grooved by Rogers' own Hollywood-based big band (with Ferguson on the altissimo trumpet parts) seven years later on the LP The Big Shorty Rogers Express (RCA, 1956), and the current version spotlights pianist Drexler (also a Herman alumnus), trumpeter Matt McCarthy, trombonist and Ferguson veteran Keith Oshiro, in addition to altoist Moss and McMillion on both trumpet and valve trombone.

Last but not least, McMillion and company offer their tribute to the late pop icon Michael Jackson with Wayne Beardwood's arrangement of the title track from the superstar's multi-platinum 1983 album and subsequent video, with sterling solos from Oshiro, Moss (this time on soprano), and the leader. Nice N' Juicy represents one more outstanding gem from this Florida-based bandleader.