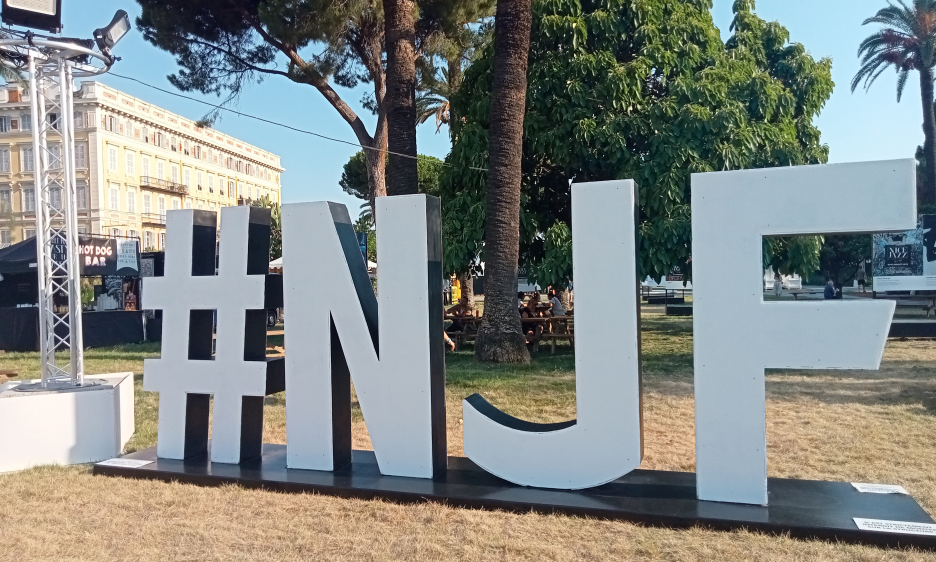 From the land of Zulu kings in South Africa, Nduduzo Makhathini played the piano and Logan Richardson alto saxophone. With influences from John Coltrane and African spiritual heritage the quartet delivered insistent drum rhythms and songs in Swahili, running over time in their enthusiasm.

Emile Parisien drove his sextet forward with boundless energy, playing soprano saxophone, at times at breathtaking speed. Beside him Theo Croker on trumpet was a calming influence as they launched into "Louise." Parisien trained at Marciac, France, where he heard great music during their annual jazz festival. Italian Roberto Negro played the piano, while Manu Codija was on guitar and Nasheet Waits drums. In "Mémento," Negro began by reaching into the piano case and plucking at strings for a harp effect. The pace was slow. Parisien and Crocker played in unison with heavy reverb passing to a blues guitar solo from Codija. Negro doubled up the tempo and hammered the Steinway with merciless violence, and the rhythm section picked up in support led by Crocker on trumpet to end in a precise finish. A long bass intro from Joe Martin led to a psychedelic guitar solo from Codija in "Madagascar" composed by pianist Roberto Negro. Soprano saxophone and the trumpet began a conversation of impossibly fast riffs passing into a drum solo from Watts and another sharp finish. The speed and energy of the Emile Parisien Sextet were exhausting. The Steinway needed retuning at the break, Negro can knock a fine piano out of tune in one set.

The stage was loaded with talented musicians and composers led by bassist Christan McBride who was in exceptionally fine form. On piano Peter Martin played opposite Warren Wolf on the vibraphone, and on alto and soprano saxophones was Steve Wilson while Carl Allen had the drums. The band began with a fast "Brother Mister" composed by McBride, and into "Sweetbread" written by Wolf and back to another McBride composition ," Starbeam." They let go in "Used To Could." Mallets and sticks were flying, the piano racing and alto sax screaming while McBride stood in the middle of the melée smiling and happy. Next came "Ms Angelo," a Wilson composition which refers to the poet laureate. McBride gave a showcase intro to McCoy Tyner's "Celestial Chant," and the band moved on to a McBride tune ," Shade of the Cedar Tree." Then came the surprise. McBride took his bow and played the complicated Jimmy Blanton solo to "Sophisticated Lady" while Martin played the Duke Ellington accompaniment. McBride took great care with the musical gem, which he delivered with authenticity and style. Blanton and Ellington recorded Sophisticated Lady for HMV in 1940 when Blanton was at the height of his inventive powers. Two years later, Jimmy Blanton died. He was 23. Christian McBride's Inside Straight gave the audience a tour de force experience of musical excellence and original compositions.

Parisienne Gabi Hartmann is a vocalist who plays the guitar. She travelled to Rio de Janeiro, where she became entranced by Latin rhythms which inform much of her current output. She sang "Maladie d'Amour" (lovesick) in her native French. The other content was in Portuguese and ended in English with "I'll Tell You Something." Hartmann has a strong voice and enunciates clearly. Any uneven notes were covered by support from her bass and guitar players singing in close harmony. The group played well together in support.

Born in the former French colony of Ivory Coast, Samy Thiébault studied in the Conservatoire and at the Sorbonne in Paris. His Quintet included drums and percussion, trumpet, bass and piano, giving a big sound which leaned either towards Cuban or West African rhythms. The Cuban music came from his recording Baila (dance) and the African from his Awé! recording, both of which are on the Gaya label, which he founded. As well as tenor saxophone, Thiébault, wearing a bright red suit and sunglasses, also played the flute and sang. The group gave a powerful and cohesive performance leaning heavily towards hard—driving dance rhythms.

Legendary pianist Kenny Baron was joined on bass by Kiyoshi Kitagawa and Willie Jones III on drums. The trio began with "How Deep Is The Ocean" and moved on to "Bud Like," Baron's tribute composition for Bud Powell. Baron played eights with the drums, then maintained a robust left-hand rhythm which Jones mirrored going into his solo. "Waltz for Ruth" was written by bassist Charlie Haden who recorded it with Barron. The relaxed cabaret piece was brushed gently along by Jones. The trio picked up the pace to a galloping "Surrey With A Fringe On Top" from Oklahoma!. The precision playing and timing of the Kenny Baron Trio speak of quality and depth of experience. The variety on the carefully balanced set list was a broad sweep through jazz history.

Born in Armenia, Yessaï Karapetian came to live in Marseille. His studies took Yessaï to the conservatoire in Paris and to Berklee college in the United States, where he did his doctorate. His brother Marc Karapetian joined the group on the electric bass with Theo Moutouon drums and Gabrielle Gosse on guitar. The tenor saxophone was played by Mounir Sefsouf. The raw energy emanating from the group was tangible and surprising as temperatures were 98f degrees, and the audience was all a flutter of fans. They played long and loud pieces like "Faire Fait" (done thing), which ended in a quiet piano solo. "Dernier Madrigal" (last madrigal)began with a saxophone solo and turned to a ferocious yet romantic piano piece. The performance may have lacked some subtlety, but the years of training and practice showed through in the skill of the two brothers.

Gerald Clayton played the piano with Gregory Hutchinson on the drums and Joel Sanders on the double bass. They played an original tune, "Water's Edge," together. The most interesting interplay was between Hutchinson and Sanders. Sanders often sang along with his bass while Hutchinson quieted the drums to allow the vocals to be heard. In another original, "Envisions," Clayton played both the Steinway and the Rhodes at the same time. The bass was bowed by Sanders humming along, while the drum were brushed, and after a crescendo, they returned to the bass in arco to fade them out. "My Ideal" was a jaunty piece of music which rolled along into a drum solo supported by chords on the piano at the beginning of "I Love You." The professional performance was enlivened by the rhythm section interplay and the, at times, sparkling piano skills.

At a small celebration before her performance Melody Gardot was gifted a beautiful pendant by Mr. Abibe, president of Ferret Jewelers, to welcome her back to Nice. Gardot gives more than a performance. She presents a show filled with sultry drama and music. She was supported on saxophone and flute by Irwin Hall and on the piano by the collaborator in her new project Philippe Baden Powell. First, she sang "Our Love Is Easy," then moved on to "C'est Magnifique!" Gardot easily hits her notes, often adding high scat phrases to end a tune or solo. Constantly on the move, she dances and strikes poses in time, consistently hitting her cues. Phillip Powell is Brazilian, which informed much of the content in the songs which he had presented to Gardot for inclusion in their recording Entre Eux Deux (Decca,2022). Powell played the only instrumental track, "Recitativo," and Gardot sang "This Foolish Heart Could Love You." The next song was a Samba duet, sung in English and Portuguese simultaneously, "Samba Em Preludio." Bass, saxophone and a side drum lined up to play a swinging "Les Étoiles" (the stars) to close the performance on stage and live on TSF jazz radio.

Samara Joy is an exceptional talent. She was joined on stage by the Pasquale Grasso Trio for her performance. The tall, elegant figure of Joy from the Bronx, New York, dominated the stage not just with her presence but with the stunning range of her vocal abilities. An admirer of Sarah Vaughan, Joy began with "Can't Get Out Of This Mood" and, after a guitar intro from Grasso, treated her audience to a beautiful version of the classic "Stardust." On to "If You Never Fall In Love With Me" and Thelonious Monk's "Worry Later." With perfect phrasing, Joy sang "Be My Love" with only a bass accompaniment returning to Monk for "Round Midnight." When you don't know what to choose, you can't lose with the blues. Joy called "Baby Please Don't Go" in b-flat delivered with faultless range, precision and sheer vocal power. The audience would not let her go, so she gave them Nancy Wilson's poignant conversation with herself, "Guess Who I Saw Today," for a second standing ovation. A gifted young talent, Samara Joy will rise to her chosen professional level with the same ease that she hits her highest notes.

Veteran classical, film and jazz musician Michel Portal came to the stage with his bass clarinet accompanied by trombone, keyboard, electric bass and drums. They opened with "African Wings," an original composition, and went on with "Mino Miro" and "Armenia," recalling a visit to that country. The content came fromMP85 (Label Bleu, 2021). The title is his initials and age combined. Portal is a legend in French music, an expert in jazz, Mozart and film music.

Composer and bassist Marcus Miller wrote and produced three albums for Miles Davis in the 1980s, Amandla, Music from Siesta and Tutu. Playing his favourite 1977 Fender jazz bass and wearing his signature hat, Miller started "Where My People At" with "Three Deuces" to follow, calling in the instruments he wanted to join him as he needed them. The alto saxophone played strongly with drums from Anwar Marshall in "Untamed," but they lifted the roof with a roaring "Bitches Brew." That's the way to end a memorable jazz festival!