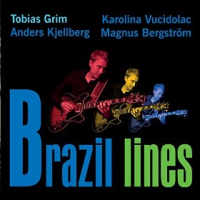 Sweden and Brazil are more than 6,400 miles apart. Their weather, culture, customs and folklore couldn't be more different, but music proves once again to be a universal language that builds bridges even between such contrasting lands.

The Swedish guitarist Tobias Grim has a deep love for the “South American giant" and it's magical music.

Grim and his band understand bossa nova and Brazilian jazz languages even though the guitarist confessed he has never been to Brazil. His dream to travel and play in Brazil will soon come true, since he and his band will perform two shows in Salvador de Bahia on April 25 and 27, and one in Rio de Janeiro on April 30.

This accomplished musician, who explained that he loves the “rhythm, harmony, melodies and passion of the Brazilian music," recorded with the support of Karolina Vucidolac (vocals), Magnus Bergstrom (bass) and Anders Kjellberg (drums).

Even though Vucilodac was born in Macedonia and raised in Sweden, she sings almost as fluently in Portuguese as a native speaker. She previously toured in Brazil and Sweden with Nosso trio (Nelson Faria, Kiko Freitas and Ney Conceição).

“Ishmael" is another very interesting song Grim describes as a mixture of Arabic and Brazilian music. The guitarist passionately plays a fusion of Middle Eastern and Brazilian licks, while Vucilodac scats joyfully and Bergstrom builds a strong foundation.

“Cantar" is another enjoyable song that showing the band's deep love and understanding of bossa nova, Brazilian music and culture.

Grim plays acoustic guitar on “Autumn," a soulful instrumental in which Bergstrom plays an emotive solo.

The renown vocalist and pianist Tania Maria receives a homage in “Tania." Vucilodac sings freely and Kjellberg improvises on drums to show more of his skills.

The title track is probably one of the brightest songs on the album, as Grim and Vucilodac express their deep musical connection once again. Grim plays an exciting solo, then gently escorts the vocalist through the rest of the song.

It's difficult not to close your eyes and move your feet to the rhythm of “Deturn," another instrumental track where Grim shows his love for jazz, with several solos.

“Pra chegar" (To arrive) is an inspirational song that adequately closes the album of this young and talented band. According to Grim, they composed it because “to arrive to your goal in life you sometimes need to stop, gather strength and reflect about what are you doing. Only that way you will be able to reach it."

Grim and his band set the bar high for their future recordings with this inspiring, enjoyable debut.