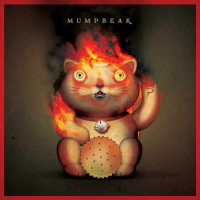 New York - It is safe to say that you have never before heard anything quite like Mumpbeak. Throbbing with intensity and a sense of mystery and searching on each track and imbued with undeniable virtuosity, this powerhouse outing is a significant extension of the prog-rock legacy established by the likes of King Crimson, Yes, EL&P, Gentle Giant and others. Fueled by the formidable yet flexible backbeats of Pat Mastelotto (King Crimson, Naked Truth) and grounded by the humungous fuzz bass tones of Shanir Blumenkranz (John Zorn, Abraxas), it stands as a stunning showcase for the creative keyboard manipulations of Roy Powell (Naked Truth, InterStatic), whose heavily-effected clavinet playing throughout emulates guitar gods on the order of Allan Holdsworth and Jeff Beck. Augmenting that core lineup is a cadre of low-end stars in bassists Lorenzo Feliciati (Naked Truth), Tony Levin (King Crimson, Peter Gabriel) and Bill Laswell, who also produced and mixed the session for RareNoise. Together they create an imposing sound that is intricately structured, in the great prog-rock tradition, though far looser and more powerfully interactive than that genre generally allows. Says Laswell, “Itʼs more elastic and thereʼs more humor in it than you would find in a really regimented, military prog band.

Part of the looser feel to the proceedings can be attributed to the playing of drummer Mastelotto, whose approach to the kit on tunes like “Biscuit," “Monocle" and particularly “Piehole" is freer and more flowing (in the tradition of Elvin Jonesʼs over-the-barline playing with John Coltrane or Mitch Mitchellʼs Elvin-influenced playing with Jimi Hendrix on the Experienceʼs ʻjazzierʼ numbers like “If Six Was Nine," “Third Stone from the Sun" and “1983: A Merman I Shall Turn To Be") than with most prog-rock drummers. Says producer Laswell of Mastelottoʼs interactive style throughout the Mumpbeak sessions, “That helps a lot. It keeps it from being math. It turns it into something a little more fluid."

Says Mastelotto of his jazzy inclinations heard on Mumpbeak, “There was a lot of freedom. I recorded at home so no oneʼs watching and I can just go for it and then edit the crap out. I donʼt think Roy ever questioned anything I played on these tunes and if I offered him a choice of direction on drum takes, he always chose the most out take. Roy is a jazzy son of a bitch anyway, so it feels OK to do some of those things like the double strokes you hear throughout the record. Growing up, Tony Williams and Art Blakey were two of my favorite drummers. In fact, I first heard Tony Williams Lifetime and King Crimson on the same day, back to back, listening through headphones at the Oroville Public Library in Oroville, California."

This superb ʻart by committeeʼ project started off as the brainchild of Powell, who crafted the tunes and structures from his base in Oslo, Norway, then sent the music to Mastelotto to add drumming parts from his home base of Austin, Texas. Finally, Laswell was recruited to contribute the low-end to this slamming project. And for that, he chose Blumenkranz, who is fast emerging as a rising bass star on the scene through his exemplary work with John Zorn on various projects, including his remarkable gimbri (Gnawan stringed instrument) playing with the screaming two-guitar band Abraxas. Blumenkranz added his parts in a Brooklyn studio while Laswell did some ʻtouch upʼ bass parts at his studio in Orange, New Jersey. Legendary bassists Feliciati and Levin later came onboard to add their distinctive bass parts to two songs — Feliciati playing his signature fretless bass lines on top of “Nork" and Levin grounding the highly experimental soundscape “Chain" with his trademark humungous deep tones.

Mastelotto explains the genesis of this Mumpbeak project: “Iʼll tell you how this batch of biscuit tunes started for me. First, you need to know that Roy is a seriously crazed and deliriously musical individual. So one day Roy sends me this email with his new idea — itʼs him playing clavinet through whammy and distortion pedals so it sounds like a pedal steel or some crazy country style guitarist with a B-Bender. I mean, it could fool anyone! Mondo coolisimo and so dynamic and powerful! And Iʼm like, ʻWow! This is killer!!ʼ And I email back to him, saying, ʻYou should put this out or do a record like this.ʼ And. ..bam! He immediately sends me the first tune, ʻOak Room.ʻ So he already had it brewing."

Powell explains his adventurous excursions on Mumpbeak. “Over the years I have become less interested in stock electric piano or Hammond organ or acoustic piano sounds. I gradually evolved more and more interest in preparing a piano by putting things on the strings or using effects on a Fender Rhodes electric piano and realized that it helped me to find genuine fresh expressions. So one day when I was playing my clav at home I thought I would max the guitar aspect of the instrument and see where it would take me. I recorded some stuff and sent it my Naked Truth compadre Pat Mastelotto and he wrote back encouragingly. We soon had a whole bunch of incredible musicians on board and I wrote up some parts and we got it done."

Laswell says he came on board after Mastelotto and Powell started cooking up things together in their respective studios. “They created some structure and some patterns and foundations and then I was given sort of the opportunity to add bass ideas to it and then mix it. But it pretty much was generated from their side, for sure. On our end, I recorded Shanir, who is pretty dominant on a lot of tracks. There was notation, quite a few structured patterns that Shanir had to deal with. But they were fairly easy to follow and he played those very quickly and with expertise."

After decades of working as producer-conceptualist of countless recordings by the likes of Herbie Hancock, Bootsy Collins, Sly & Robbie, Mick Jagger, Motorhead, Iggy Pop, Ginger Baker, PiL, Buckethead and his own series of Material, Massacre, Last Exit, Praxis, Painkiller and Method of Defiance recordings, Laswell has come to embrace the studio as an instrument in and of itself. Therefore, he has no problem at all playing to previously recorded tracks.

“The only difference between recorded music and live music is the visual aspect," he says. “Playing live really doesnʼt have anything to do with audio and sound and playing so much, itʼs strictly a visual thing. You look over and you have this kind of perception that because youʼre with someone in the studio, youʼre playing better together. Itʼs not always the case. Playing with recorded music is absolutely the same if you do this continuously and consciously and with experience. Old school people say, ʻNo, you have to playtogether,ʼ but that really goes way back and itʼs not necessarily true anymore. We recorded Shanirʼs bass parts for this album in Brooklyn. So naturally, he was playing with recorded music. Itʼs something that everyone does these days. If you know how to play with the sound youʼre hearing in the headphones, playing with recorded information is absolutely no different than playing live with musicians. You just have to adapt to it and it comes with experience. Theyʼre the same thing, to me."

Laswell adds that his own bass contributions to Mumpbeak were purely supportive. “Iʼm not really playing so much, just a few riffs here and there, some ideas, some textures. Iʼm just providing a little bit of support to the other basses."

While Powell mentions that he played a synth organ loop on “Chain" and also solos on synth on “Forelock," the rest of his keyboard contributions on Mumpbeak are played strictly on Hohner clavinet. And he tweaks the sounds in some radical ways using distortion and whammy bar pedals to affect electric guitar sounds. As he explains, “The clavinet is like a guitar played from a keyboard. It has strings (60) and pickups and a pre-amp, and if you run it through an array of effect pedals into guitar amplifiers you can achieve any sound you want. The only limitation was on the note bending side of things and I solved that by using a standard guitar whammy pedal effect. I just want to play all the sounds in my head especially all the twangy metallic microtonal ones and the dark distorted metal stuff."

On “Monocle," Powell comes up with shimmering chords then layers on stunning legato lines that emulate British guitar god Allan Holdsworth, of whom Powell says, “Allan has always been a hero of mine and incidentally comes from the same part of the world as me." Then on “Nork" he affects the signature whammy bar inflections of Jeff Beck while also creating some rather unique koto type sounds on his clavinet. And for his explosive, distortion-laced clav work on the closer “Piehole" or the imposing maelstrom of “Oak Room," Powell says, “Think of Adrian Belew and all the sounds he can create."

A flood of ideas pour forth on this formidable release, which sets an edgy new tone for prog-rock. Creativity and virtuosity abound on this all-star project, underscored by an audacious streak a mile wide by all the participants. Indeed, you have never heard anything quite like Mumpbeak.